The Island of Cyprus

The island of Cyprus is situated in the northeast park of the Mediterranean. It is the third largest island in the Mediterranean after Sardinia and Sicily. It has an extent of 9.251 square kilometres and a population of 1.000.000 residents.

Administratively, Cyprus is divided into 6 districts: Nicosia, Famagusta, Limassol, Larnaca, Paphos and Kyrenia. The capital is Nicosia with 240.000 residents. Other large towns are Limassol with 100.952 residents, Larnaca with 62.997 residents and Paphos with 32.754 residents. Kyrenia is currently occupied by the Turks and most of the Famagusta district has been abandoned leaving it a “ghost town”.

Before the Turkish invasion in 1974, the population on the island was made up of 82% Greek Cypriots and 18% Turkish Cypriots. There are also minorities such as Maronite, Armenians, Latins and others. After the Turkish invasion in 1974, 37% of the Cypriot land became occupied and 200.000 Greek Cypriots were forced to abandon their homes and become refugees towards the south part of the island. At the same time, the Turkish Cypriot residents as well as a large number of Turkish settlers were transferred towards the occupied part of Cyprus in the north.

The Cypriot dialect was moulded in close relation to the Arcadian dialect of the Archaean colonists. The newer Cypriot dialect is one of the most individual Modern Greek dialects, with many Arcadian elements and additions from the medieval period.

The name Cyprus seems to have prevailed from the Greeks during the time of Homer, from which it then spread to the neighboring countries. It was not the first or the only name of the island. It has also appeared on clay boards with the name of Alasia. This name answers to various toponyms such as Alassos, Ailasyka. It has also appeared with the name Kitim in the Holy Bible, even though this name seems to refer to an area that is located towards the west such as Italy or Greece.

The Greek name Cyprus can be found in the Iliad as well as the Odyssey. Cyprus is also known as the island of Aphrodite, as the Greek Goddess Aphrodite was born near Petra tou Romiou on the shores of Paphos. There are also other archaic names that seem to be linked with the name Cyprus such as Aristokypros , Aristokypra , Themistokypra , Kypragoras , Kyprothemis , Kyprokranis , Onasikypros , Pasikypros , Stasikypros , Timokypros , Filokypros and others.

The island has three main geographical regions. The Troodos mountain which is made up volcanic rock and some limestone alone with iron and copper pyrites, asbestos and chromium. The highest mountain peak is Mount Olympus which is 1952 m. The mountains are usually covered in snow in the winter. The Troodos mountain range is said to be the result of a collision which the two tectonic plates (European and African) had.

On the northern side, there is another mountain range; the Kyrenia Range which reaches 1000 m. Pentadaktylos is a mountain mass which is part of the Kyrenia Mountains and which runs 160 km along the North coast. It got is name because the mountain resembles five fingers which is the meaning of the word Pentadaktylos. The Kyrenia Mountains include many historical castles and monasteries such as the St. Hilarion Castle.

Between the two mountain ranges is the plain of Mesaoria where most of the agriculture of the island is located. The largest and most unique plain on the island is the Mesaoria plain. The Mesaoria plain is an area of1000 km².²It rises to an altitude of 325 m (1066 ft), with an average elevation of perhaps 100 m (330 ft).

Akamas Peninsula is a cape at the northwest of the island with an area of 230 square kilometres. The area is not very easy to access as there are no proper roads. Therefore there is a large diversity of flora and fauna there. Many geological formations of Cyprus can be found here, from narrow deep valleys, caves and islets to gorges such as that of Avakas, resulting in a real geological mosaic.

Akrotiri Peninsula is a small peninsula at the southern part of the island. On the one side is the Episkopi Bay and on the other side is the Akrotiri Bay with two capes , Cape Zeygari and Cape Gata. 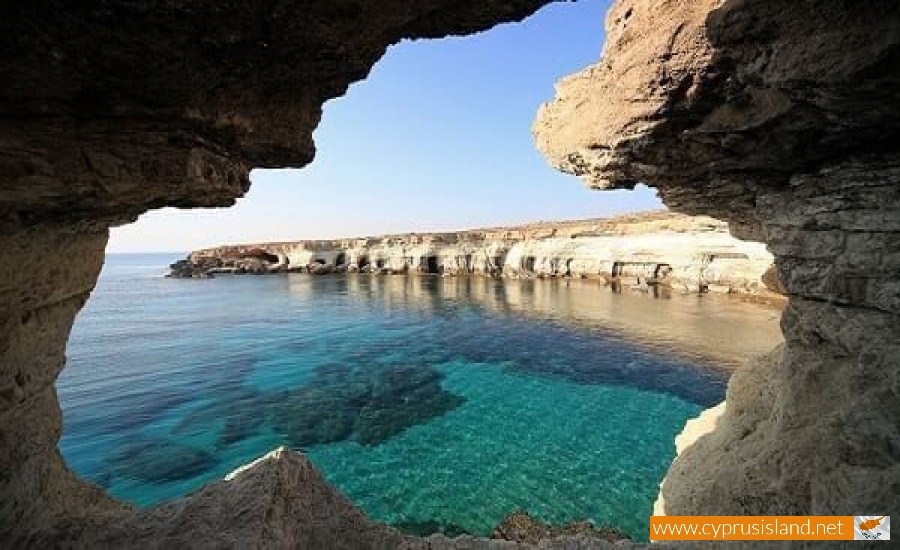