The Old Bridge of Alethriko - Larnaca

During the 19th century there were notable buildings like the holiday house of the Austrian consul (Jeffry 1918), the house of Zekki Pashia, the local police station and the ancient bridge which is on the Alethriko- Aplantas road.

The traditional bridge of the Alethriko is located south of the community at a distance of 100 metres from the first houses in the centre of the village. It goes over the Pouzi River which comes from the Stavrovouni Mountain. For centuries it assisted the villagers’’ need towards the south, until 1890. Later on a new modern bridge was built parallel to the old bridge. The bridge was an important part of the old villagers’ life as it connected the communities of Alethrikos-Aplanta-Arafotia.

As the villagers characteristically mention, it split the village to Kato and Pano Alethriko  in the Larnaca district. The top side of the river was the area for the richer residents, while the bottom side of the river was for the poor class that is where the community is today. Specific reports about the bridge at the Pouzi River exist in the recent area history which they relate to the Egyptian Zekki Pashia who was an important person of the social life of Larnaca, during the end of the 19th and the beginning of the 20th century.

Zekki Pashia had a house which is located opposite today’s community. That is where the various important people of the time gathered. Due to the importance of the bridge, Zekki Pashia gave the necessary money for the extension and restoration so that the residents would transport their products easier.

The bridge is a part of the traditional heritage of the community. Its construction presents a special interest and that is why it is being restored, so that it remains a historic point for the community of Alethriko. It is a stone structure of 30 metres length and is comprised of three arches which all have a different opening ranging from 3 to 5 metres.

The bridge is made by stone found in the area. There are three arches, two of them at the river bank and the third is at a middle level. The stone is of irregular size and shape. There are also drain at the arches for the collection of rain. The west side of the bridge, the side where the river flows has an unusual shape with a triangular edge to direct the water flow towards the lower arches.

The bridge covers an area of 165 square metres, with a length of 33 metres and 4, 5 metres width and 6, 5 metres at the triangular edge. Its height from the bottom of the river is about 4, 5 metres. The two arches have an opening of 5 metres and the third one has 3 metres. Their height is 6, 5 metres and 2 metres accordingly. The floor of the moving area is made of soil today. At the edges of the two sides there is a low stone wall. The two access point to and from the bridge have an area of 560 square metres m with a 55 metre length and 27 metre width. 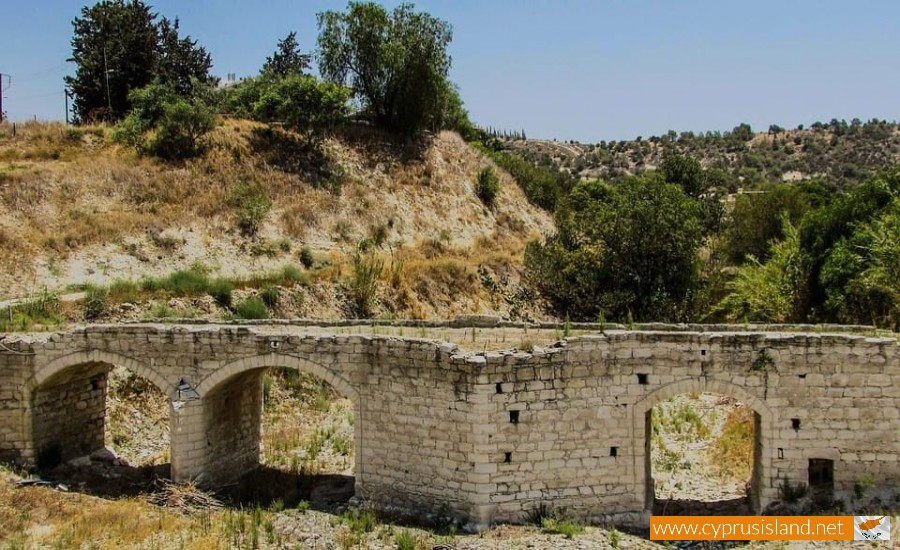