The Museum of Byzantine Icons is located in Omodos in the Limassol district and is  housed in the Synodicon of the Monastery, which features amazing beauty, a wooden ceiling, made with splendid artwork, made up of thousands of small pieces of walnut, harmonically places together.  The Museum of Byzantine Icons was founded in October of 1960, aiming to maintain and protect the old icons of the Monastery.

In it are byzantine icons from ancient times, priceless, such as ancient wooden carved and golden lanterns, which all come from the Monastery of the Timios Stavros in Omodos. All the icons are maintained by donations given by the residents and other friends of Omodos.

The following icons are especially mentioned:

Large, semi- destroyed icon, which is dated to 1528 A.D. It presents the princess Eleonora to the right, with red clothing and an embroidered cover on her head, decorated with stones dedicated the icon to the Saint.

This icons is of 1570 A.D. He is straight, full-length in the picture, with a portrait of the donor at the right part of it.

This icon is of the 15th-16the century with a later overpainting. The saint has a stylus in his right hand and the Gospel in his left.

It is the first half of the 16th century. Apostle Peter is on a bust with keys and a scroll on his left hand, and gives his blessing with his right.

He is on a bust with his left hand closed and gives his blessing with the right hand.

It is of the 16th century. He is on a bust and his right hand holds a scroll.

It is dated from 1664 A.D. Saint Konstantine and Agia Eleni are in the centre. They are holding the Timio Stavro. This is a scene from the search of the cross. On the four sides there is the history and scenes of the wonders of the cross.

It is dated from 1773 A.C. The characteristic in the icon is the face of the Mitropolite of Paphos Panaretos, which is painted under the left hand side of the icon and offers the Holly cranium of the saint in a golden case.

It is dated from 1830 A.D. The saint is shown in full-length with wings, and holds an open scroll in his right hand and an icon with the Crucifixion in his left hand.

It is dated from the 18th century. 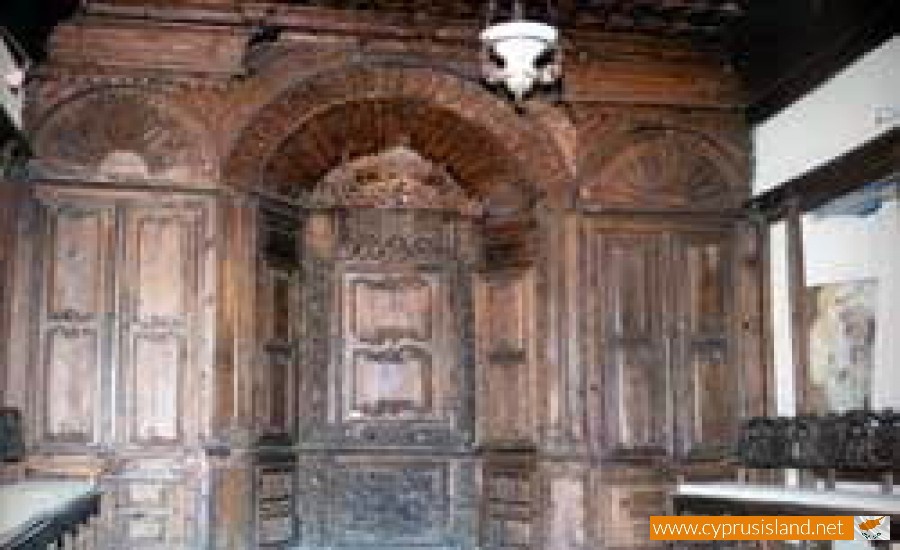