Cyprus has always been rich in olive oil since antiquity. Is was one of the basic agriculture products of the island with great importance in the population’s diet as well as the economy of the island. According to Stravona (963 B.C- 25 A.D) the Cypriot oil was the most well-known as it was light and could be easily contained by the body.

The olive oil was used as a basic ingredient in soap making in Cyprus as well as other areas in the Middle East.  The Cyprus oil is considered to be of excellent quality but the quantities which are exported were confined due to the fact that the olive picking did significant damages to the trees. During the middle of the 19th century, olive production increased dramatically. This occurred so much that the production that year covered its needs in triple. The main production areas were Kerynia, Kythrea, Larnaca and Limassol. The areas mentioned, are the main areas of oil production today.

Olive mills are not only the facilities for the olive but also the building in which they are kept. These small facilities are divided into outdoor and covered. Most olive mills are built in church squares or monasteries. Apart from the fact that during the Turkish occupation they provided protection, it also had to do with the fact that the church owned a lot of farming and agriculture land.

The Lofou Olive Oil Press is owned by the church and was built around the beginning of the 2th century. The whole facility is covered and so it has not been destroyed with time. The building is a stone built building which included two rooms. In the one room there are the tools necessary for the oil production and the other room was used as a storage.

The basic facility of the olive mill is the stone mill which turned while the human or animal pushed it, as well as the necessary storage instruments. On the one wall there is the so called niskia which is used for lighting the fire necessary to boil the water.

The stone mill is made of a stone with a circular base with a carved shallow basin on top. The round stone moves in this base. In the centre there is a hole which a long stick goes into and then it can be turned in order to crush the olives. The second way to get the oil is with a pressure machine. The olives are placed in a steel construction in which they are crushed and the oil comes out.

As mentioned before the olive mill was the property of the church. For the crushing of the olives and the collection of the oil they had to give the church something in return. Most of them usually gave money or oil. Usually for every twenty litres of oil about one was given to the owner. Also the customer had to offer the staff, breakfast lunch and dinner. Lastly the customers were given some wood which was used for warmth or cooking. The olive mill of Lofou was built in Limassol as it is shown by the large capital letters on it.

Preparation for the oil production

The various methods of olive oil production in Cyprus can be seen over the years due to the archaeological findings. In the earlier years until the mid-20th century, the method was the traditional oil mill and nearly each village had its own.

The olive picking began in October according to the olives and the weather. The olives were hit down with sticks. After that they would collect the olives and lace them to dry out. The washed olives would be brushed and turned into a pulp. From the pulp came the pure olive oil. The traditional olive mills operated until the mid of the 20th century and then the modern pressure machines took over. 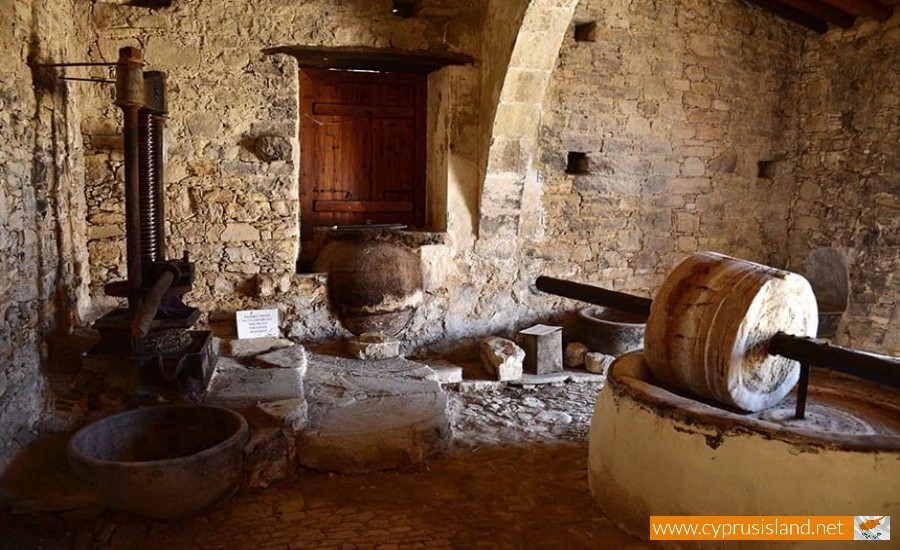 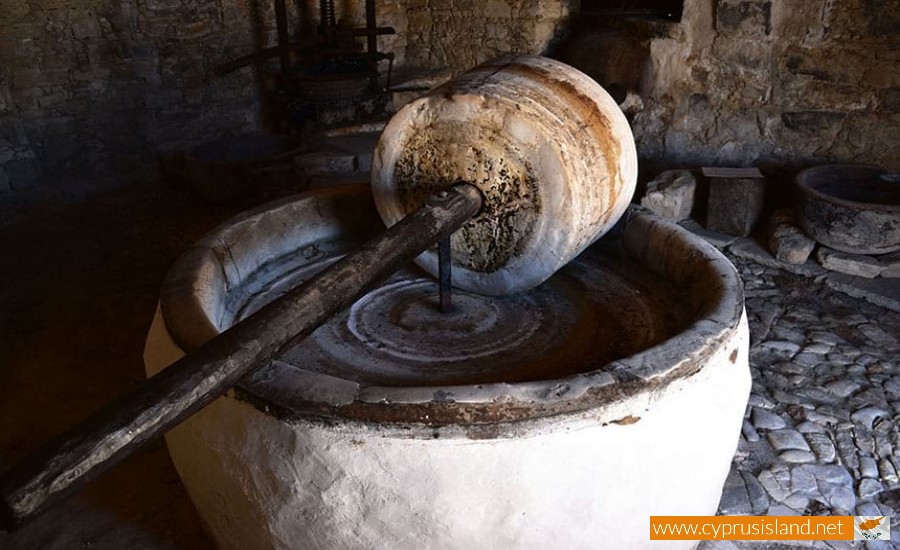