The potters and their art processed the clay in order to satisfy the needs of the people for storage, transportation and maintenance of their products. Until the Turkish invasion in 1974, the island’s heart of potter were the following villages:

Nowadays however, pottery is confined mainly to Korno and Fini. The dirt in the areas of Fini were dug for centuries by the villages, who had created pots on the spot before they transferred them to other areas.

Fini is also well known for its complicated small sculptured clay pots, with the characteristic red distinction. They are made by hand, mainly by women without the use of the spinning wheel and are mainly used for decoration.

The village of Kornos was able to maintain the tradition of pottery, for which it is known. The shape, the size and the type of pottery is according to its use. Besides the pots there are also jugs (of medium size for water), the satzia (large wide utensils used for trying) and others. Today pottery is maintained as cottage industry.

The characteristic of the traditional pottery in Lapythos is the coating known as “patanas”, the incised decoration and the colourless glaze. The pottery refugees from Kerynia, reinstated their workshops in the free areas of Cyprus where they continued the tradition.

The traditional pottery of Ammochostos mainly includes pottery from light coloured clay, cooked in wood ovens, which are then used as decorations (jugs, for watering and moneyboxes). They were also exported to neighbouring countries.

The most interesting pottery items are the anthropomorphic of this area which date back to antiquity.

Pottery art in the community

Pottery art was presented in the life of Cypriots from the Neolithic age. The Cypriot maker quickly used the plastic abilities of argyle from the Cypriot ground and created pottery to cater for their everyday needs. The appearance of this art brought revolutionary changes to everyday life. Inspired by the environment, Cypriot nature and psychological mood, intelligence and ability, the maker chose what was useful to him. The effects were many and continued. Even though there were many effects which changed due to the occupants of Cyprus, the maker chose what was useful and expressed it in a particular way adding it to the file of Cypriot culture. Each era has its own production centres with separate local characteristics.

The Fini village developed a special and large pottery art whose history is lost in the centuries. During the last hundred years it has been one of the four most important pottery centres in Cyprus. These pottery items are made even today in this village and have red pores similar to those of Kornos.

Fini is located south of the Troodos mountain range, 3 kilometres from the Holly Monastery of Trooditissa and 6 kilometres from the mountain resort of Platres and forms the west part of the Wine villages. The morphology of the ground , as well as the rocky mountains in comparison with the low money they were earning due to the climate , forced the residents to turn to ta second occupation that of the pottery maker in order to increase their income.

This art was a prosperous occupation for a large number of families. The men were mainly the ones who made the pottery and the women created items used for the transportation of water and the agriculture items. Today this art is mainly a women occupation. The prosperity and development of the village from the income of this art became the reason for its use in the village Kaminaria and Agio Dimitrio. During the last century the pottery art had developed and preserved as home art. In Fini the men created large pots without the use of a wheel which were used for wine storage. Due to this development, Fini became the centre of pottery used for wine.

The handmade pottery of Fini , are still made in the same way as they were dne thousands of years ago without many changes. The form of the pottery is done on the traditional turn wheel. There is a replica of the 5th century B.C of this exact tool at the British Museum. The maker sits and places the spinning wheel in front of her with the clay to one side. Three pieces of pine cork is placed on the spinning wheel which assists the maker and also helps with the transportation of the pottery when it is still soft.

At the centre of the cork, is a piece of clay about 2-3 kilos, in the shape of a ball according to the size of the pottery that will be created. The spinning wheel turns and the maker begins to make soft punches on the clay ball creating the base of the pottery. Then with the use of his left hand, pressing on the inside and with his right hand externally, he creates the wall of the pottery giving it shape. When necessary, the wheel turns and is controlled by foot.

The mastered factory products which are imported and the creation of bulk production in the market, have replaced handmade items. The same thing occurred to the creation of large clay pots. Their creation was hard and time consuming that is why their production was stopped during the beginning of the 1970’s.

The clay pots were very big and that is why they were created in the location where they could be used. They were mainly created by men. The ingredients used were found in the nearby areas of the village. When the clay pots were created in other villages, the buyer of the pots would transport the soil from Fini to his village. The transportation of the soil was done by the soil transporters. During the summer and spring months the pot maker would go to the village of the buyer in order to create the pots there.

The creation of a large clay pot could take 20-45 days according to its size. The pot maker would take a piece of clay of about 3-4 kilograms with him in order to create the beginning of the clay pot’s base. On the same day he could create the beginning for 20-25 clay pots. Every day he would add a few centimetres of clay on top of the previous form, creating a new ring every time. The new ring had to be kept moist until the next day, so the maker covered the pots with walnut leaves. This process lasted for about 4-6 weeks according to the size of the clay pot. The drying took another 10-15 days. The heating of the pot took place in special heating areas which could hold 3-6 pots according to their size. Many of the pots have the name of the maker as well as the date of which they were made. Some other also have the name of the buyer inscribed on them.

The heating of the pottery

The heating of the large clay pots

The creation of pottery was a hard and time consuming occupation but at the same time it brought pleasure and satisfaction to the maker. Today the creation of both pottery and large clay pots has been diminishes as there are products of mass production which have replaced them. The appearance of various factory made products during the 1960’s forced this art to be abandoned. 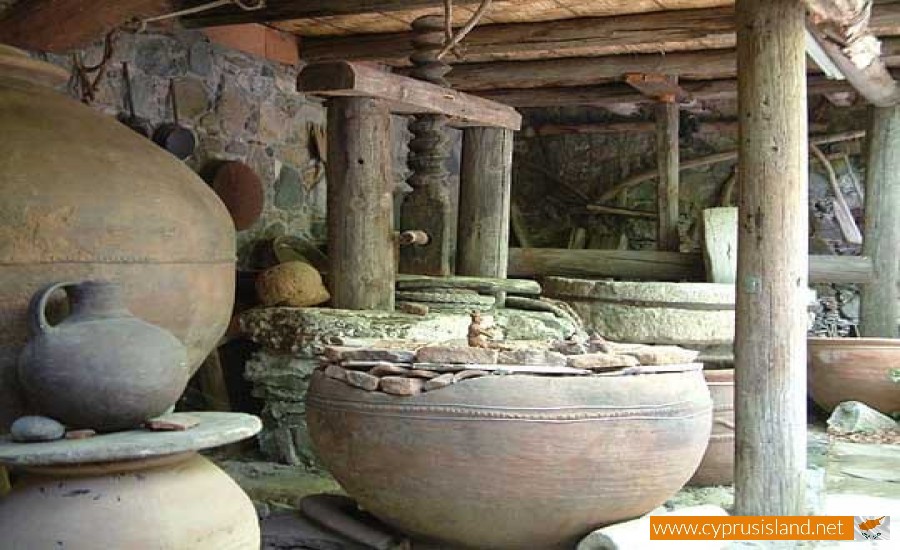 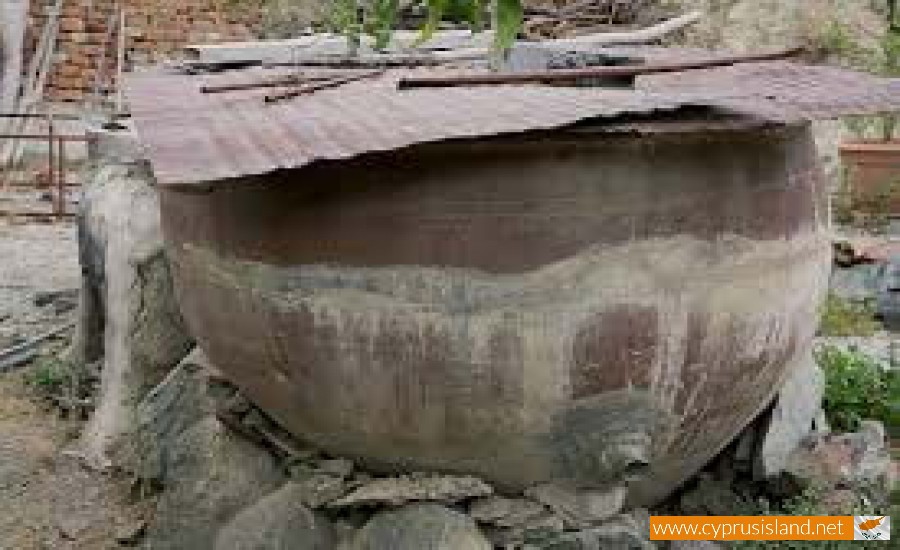 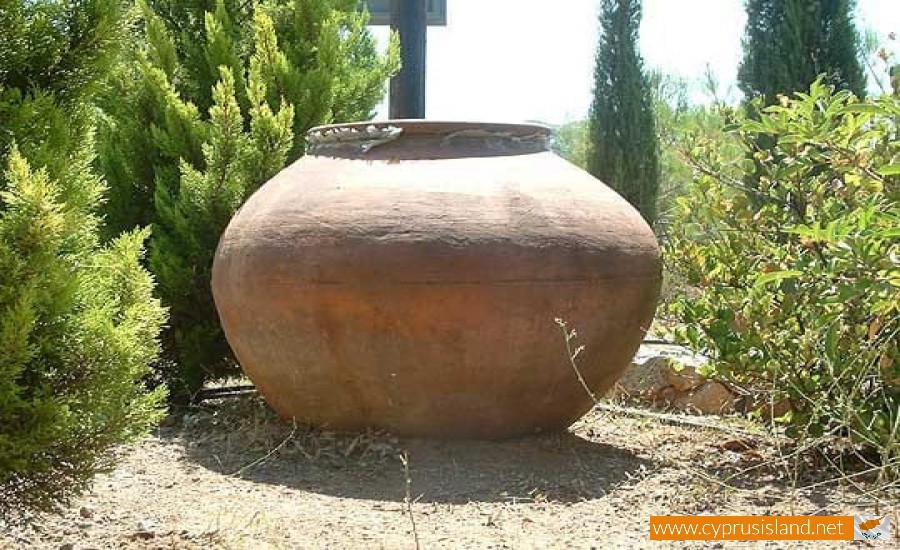