Pryga is a village in the Larnaca district, located halfway between the road from Nicosia to Limassol. More specifically, it is situated between Korno and Psevda in a valley which is crossed by a smaller river of Tremithos and under the north mountain foot of Starovouni.

Pyrga is protected by the mountains Appiadji , Sinova, Vasioti , Evgali , Stavris , Viklia and Pipi. These mountains are completely covered in green. Taking one of the money paths or off road towards the mountain hill tops you will be impressed by the abundance and variety of the natural vegetation.

South to the village is the mountain Evgali , which reaches 450 metres , and exactly behind it is the tallest part of the village, the peak of Stavrovouni at an altitude of 688 metres. The Holly monastery of Stavrovouni and Agia Varvara are located within the boundaries of the community.

Pyrga has an annual average rainfall of 430cm. The area is surrounded by mountains which shape a valley that forms the main agriculture lung of the area. Wheat, potatoes, vegetables, citrus fruit are some of the basic products which are produced here. Large areas of national and private land are still left untouched allowing wild vegetation to grow.

Pine trees, tremith trees and others are some of the types of trees which one can find in the area. It is not random that all the known horologists have dealt with the flora of the area. The variation on the natural vegetation is also relevant with the production of the famous Stavrovouni honey. The particular flowers give an excellent taste and smell t the honey in the area. The residents of the area have understood that the existence of the community is related with the natural location. That is why they have fought for the preservation of the natural environment in the community.

The original core of the community, which is made up of the old traditional houses is constantly abandoned. Many modern houses and holiday houses are built in the area of the village, more specifically on the hilltops. It seems that the green location of Pyrga was identified as many Nicosia and Larnaca residents found a satisfying area for their holiday houses.

The village existed during the medieval years. Its name however comes from the byzantine era. There are two versions for its name. The first is the most possible, that it took its name from the red (pyr in Greek) colour of the land in the area. The second version states that in this area there were many clay making shops as well as coal which burnt and created many fires.

The history of the village is very old and goes back to antiquity. This is what the various archaeological remains (caves, statues, coins, jewellery) which were found in the area witness. Many of these are located in museums overseas which unfortunately were taken by the commissioners of the powerful countries on the island. The poverty and ignorance which existed then made their work very easy for them.

The old medieval churches which are saved today in the community (Vasiliko chapel, Agia Marina, Panayia Stazousa) are witnesses of this period in history. An old tradition says that the great treasure of Ianou (silver and gold jewellery) which was never found , is still located in the underground tunnels which are said to be located under and around Agia Katerini(Royal chapel) at Pyrga. According to tradition, this treasure is enough to support the whole population of Cyprus for many years.

The excellent climate, the green location as well as the easy access from Larnaca and Nicosia make Pyrga a wonderful location for a holiday house or a permanent location. The centre of the village has recently been built, a large community centre where the officers of the community are located, a clinic, a post office, a café and a hall. All these show that this development will continue for the following years, transforming Pyrga into a quiet modern and close resort for the people from Larnaca and Nicosia. The natural beauty must however continue to be reserved.

The old church of Agia Marina is located to the south of the village. It was built during the 12th century and continues to have a round dome roof and an altar which was added later on. On the dome there are many half worn-out iconographies. The new church of the community took its name from this medieval church.

Today the church of Agia Marina is being fixed with the help of the department of antiquities, as well as from donation from Leventi Paraskevaidi as well as other villagers. At the back art of the church is the first water source of the village from which the whole village too their water from. In 1951 water works were done and the village had a second source.

An important medieval monument of the village is the saved small chapel which according to tradition is dedicated to Agia Katerini. The church is well known as Vasiliko chapel. The chapel was built during the beginning of the 15th century. Its architecture is Gothic of the 14th century.

It has a square shape with three doors and a domed roof which is based on three backup zones. It is built with volcanic rocks mainly red and green which were gathered in the surrounding areas. In the interior there are many iconographies on the dome and the walls. The church of Agia Katerini forms one of the most interesting remains of the Louizian Kingdom in Cyprus. Next to the church of Agia Katerini is the new church of Agia Marina which was built during the last years.

Following the dirt road to the southeast of the village along the valley of the river at a distance of about 4 kilometres near the village Klavdia, is the deserted Latin monastery of Stazousa which is dedicated to the Virgin Mary.

The deserted monastery is nearly unknown to the public and is possibly a creation of the 14th century with gothic architecture. It is the remainder of a Latin monastery which according to C.Enlart belonged to the Cistercians.

It is built with asbestos rock and placed at the river bank of the Tremith River. The cells are deserted but the church along with its arches is majestic even if the interior roof is black. It was recently renovated by the archaeological museum.

The old stone built chapel of Zoodoho Pigis is located behind the monastery of Stazousas at a lower altitude. It was destroyed by a rockslide of the side hill and was then rebuilt. The holly water of the chapel is located on the side of the hill. 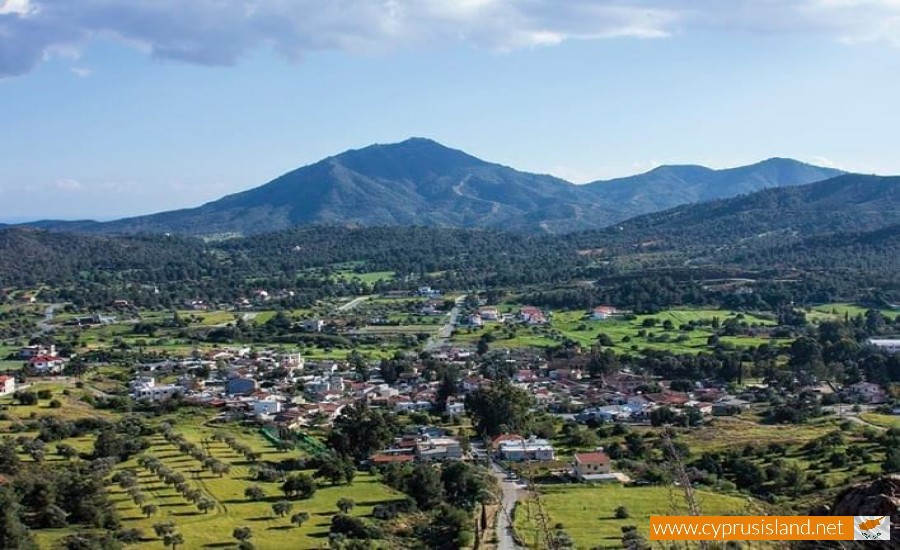 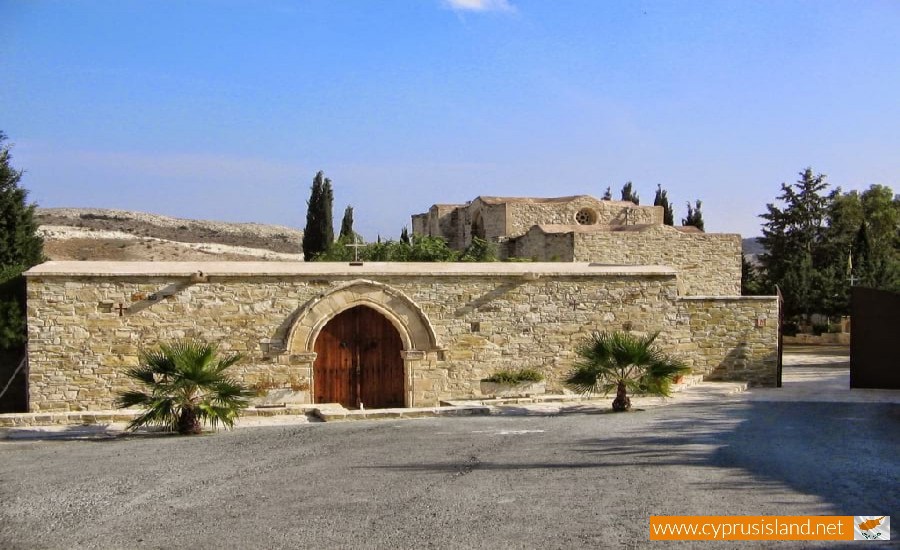