The Baths of Aphrodite are located at the east side of the  Akamas Peninsula in the Paphos district. More specifically the baths are situated near the sea, where the Chrysochous Valley ends, and the steep rocks of the Akamas Peninsula begin.

A paved road leads from Polis Chrysochous until the modern tourist information point, which is located near the source. A park with nature trails, benches for resting, a bird observatory, bushes and wildflowers have enriched the area and have been created by the Forest department in 2006.

Walking through the park, visitors will come across the bottom of a vertical rock with water welling from it like soft rain pouring into a lake.  The lake has a diameter of about five meters, while its depth does not exceed one meter. The water is clean and cool. A groove transfers the water from the lake towards the sea. The vegetation in the area is so thick that the source and the lake are permanently shady. It is surrounded by platanus, ficus, ceratonia, quercus, thymus and other trees. If visited during spring time, visitors will also come across cyclamen, gladiolus, anemone, cistus and calycotome flowers.

The rock from which the water pours out of, creates a small cave. The beauty of the location, combined with the wilderness of Akamas make it the favourite place for the goddess of beauty. The Greek roman poet Claudius gives a remarkable description of the kingdom of Aphrodite in Cyprus, during the 4the century A.D. The description given, seems to refer to the location of Akamas even though it has changed with the passing of time. Claudius refers to two sources, one which is mixed with honey and the other with venom. It is said that cupid dips his arrows in these springs, that is why some of them are bitter and others are sweet.

The name Baths of Aphrodite are first mentioned by  Athineos (170-230 A.D) who refers to the plant called silene which grows in the baths of the goddess of love in Cyprus. He adds that the baths is the location where Aphrodite bathed in and then slept with her husband Hephaestus. He mentions that the area of Akamas was the kingdom of Aphrodite which was also surrounded by walls made by Hephaestus. This fact reminds us of the isolation of the area which brings a local tradition that there is an invisible force that keeps people away.

The Akamas Peninsula covers an extent of 17,910 hectares. It is situated at the western part of Cyprus, in the Paphos district. To the south it neighbours with the villages of Peyeia and Akoursos, and to the east with Kathikas, Prodromi and Latsi. According to one version the area received its name from the tragic hero Akamanta, the son of Theseus and Fedra who founded a colony with the capital of the town of Akamantidos.

Many locations of the peninsula have received their name from elements and facts of ancient Greek and Cypriot mythology and tradition such as the “Baths of Aphrodite”, “Smigies” (the location where Digenis met with Rigaina), the “Tower of Rigaina” and “Fontana Amoroza” (source of love). According to Greek mythology, Aphrodite was married to Hephaestus, the blacksmith of the gods. This myth possibly occurred due to the relation that Cyprus had with metal and specifically with copper. It is said that Hephaestus built a palace out of gold and precious stones in an idyllic location on the island, for Aphrodite. It is possible that this location is in Akamas.

The highest peaks of the peninsula are taken over by forests of coniferous and evergreen trees, while the lower areas until the sea are filled with Mediterranean ecosystems of thymes, cistus, wild olive trees, carob trees and others. The rareness of the endemic plants, the large variety of orchids, the various forms of maki vegetation, as well as the pine trees make the forest of Akamas unique with great ecological and scientific value.

The peninsula presents a concentration of many geomorphological characteristics such as plateaus, small plains and torrents, deep narrow valleys, caves, gorges sandy and rocky beaches, sea caves and islets.  The area is greatly visited by various groups of birds during their migration or when they reproduce here. More specifically there have been 77 species of birds recorded. The important species that reproduce in the area are: Hieraateus fasciatus, Falco peregrinus, Coracias garrulous, Caprimulgus europeaus, Lanius nubicus and Emberiza caesia.Until 1990 the area was once a breeding place for the Gyps fulvus.

The Forest department in cooperation with the Cyprus Tourism Organisation have made another 5 nature trails in the Akamas Forest, with a total length of about 25 kilometres. The aim was to bring the public in contact with the fauna, flora and the general environment of the area. There is also a picnic site at the location of “Smygies” which has a capacity of about 600 people. It is worth mentioning that the 5 nature trails are embedded in the E4 Nature trail which starts from Gibraltar, goes through eight European countries, ends in Crete and then extends until our island. All 5 nature trails in the peninsula of Akamas are circular. Two of them begin from the Baths of Aphrodite, two from the Smigies Picnic site and one from the village of Kathikas.

The nature trails that begin from the Baths of Aphrodite are called Aphrodite and Adonis and they are considered to be difficult due to their uphill and downhill points. They have unique view points towards Polis Chrysochous, the Paphos Forest and Akamas. Both nature trails have a length of 7, 5 kilometres and have been embedded in the Cultural Route of Aphrodite that links areas and mobile findings from one side of Cyprus to the other. There are many bushes and flowers that are linked with the Cypriot Goddess such as her favourite rose. According to the myth, when her beloved Adonis was killed by a wild boar, Aphrodite shed as many tears as the spots of blood from Adonis. The flowers called anemones grew from his blood, and white roses grew from her tears.

Additional Information
- Driving from Paphos requires about 50 mins to 1 hour and is 45 Km far from Paphos.
- Car park can be found at the start of the path that leads to the baths.
- Toilets can be found within the Tourist Pavilion opposite the car park.
- Beside the Pavilion visitors can access a narrow beach.
- Food and drinks are available in the Pavilion.
- Visitors will need about 5mins walking to reach the baths. 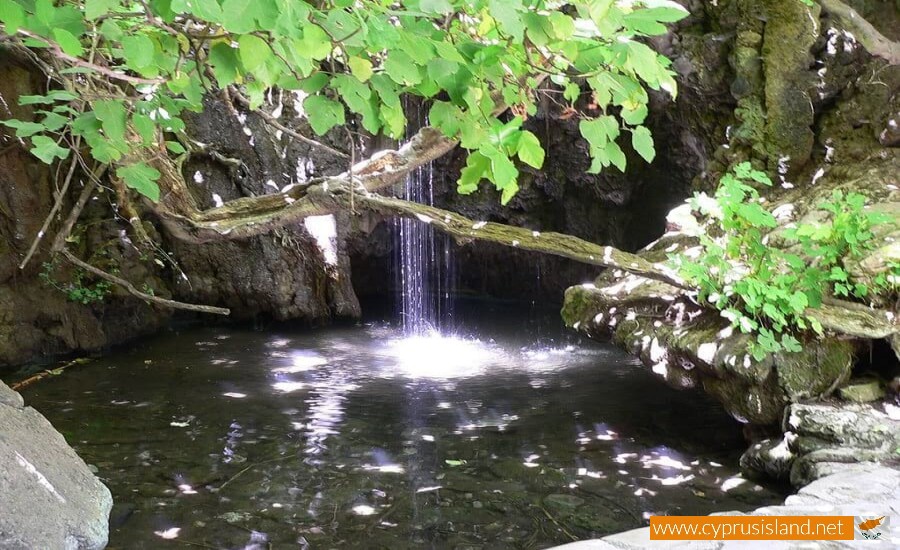 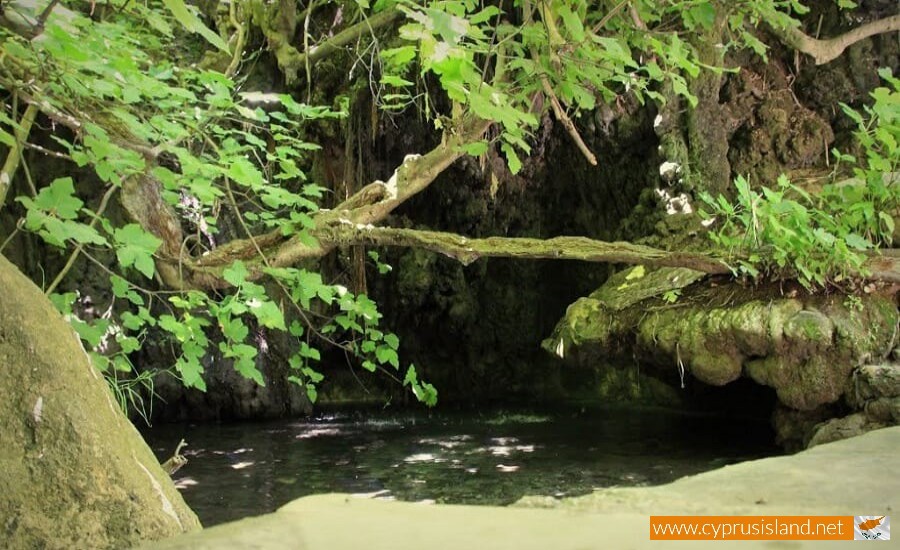 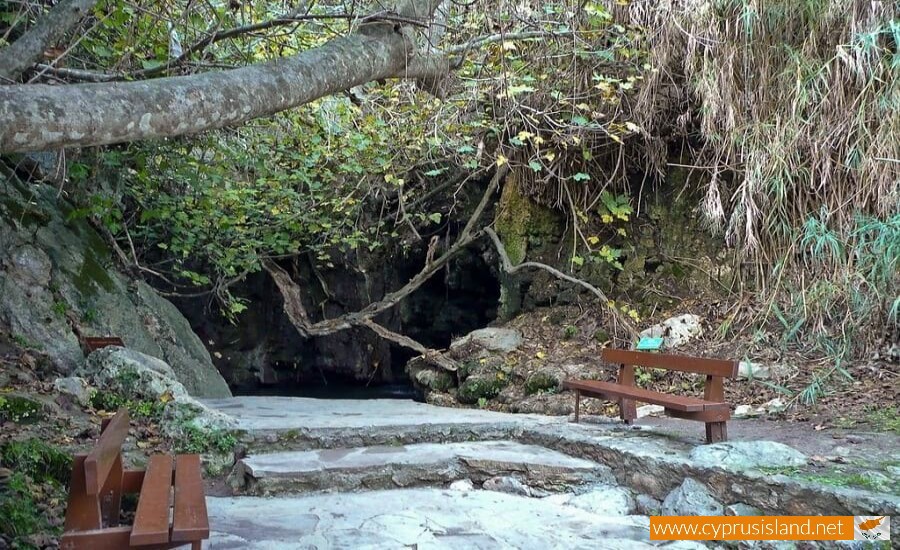 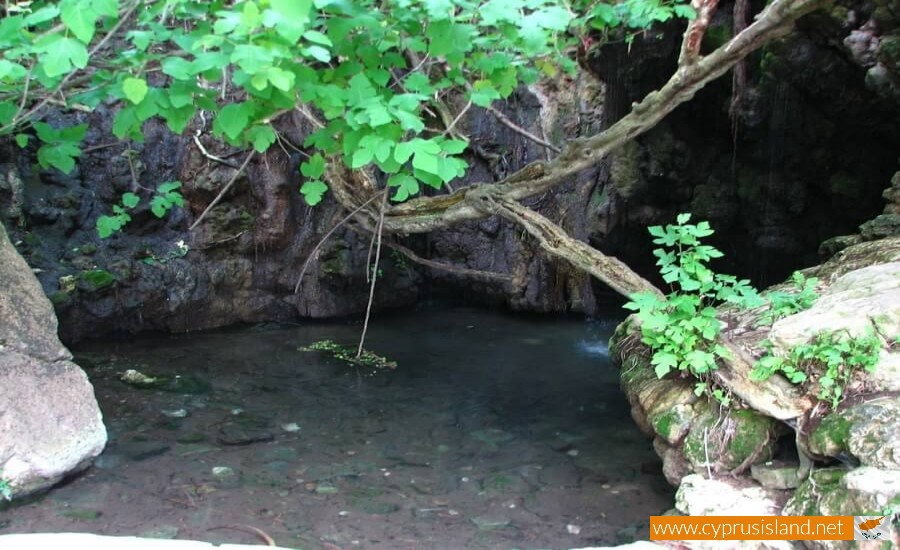 Baths of Aphrodite in Paphos 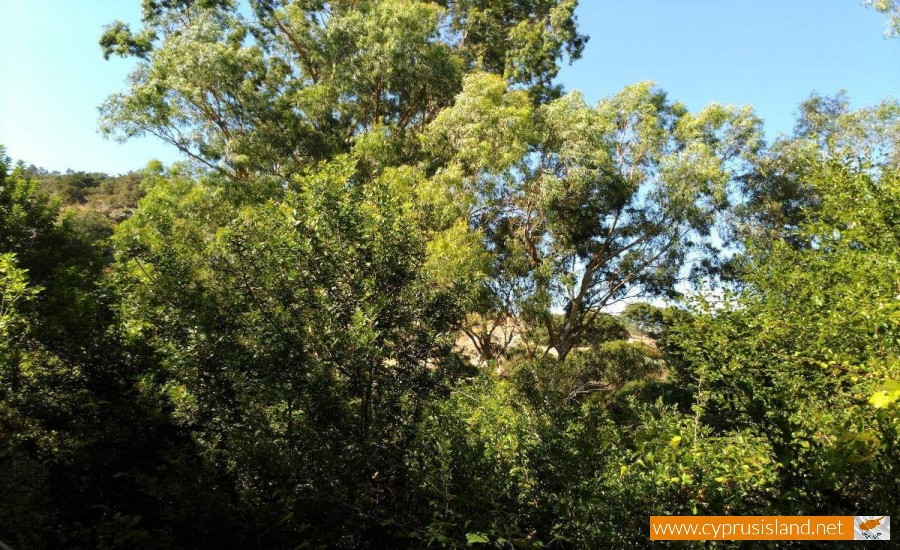 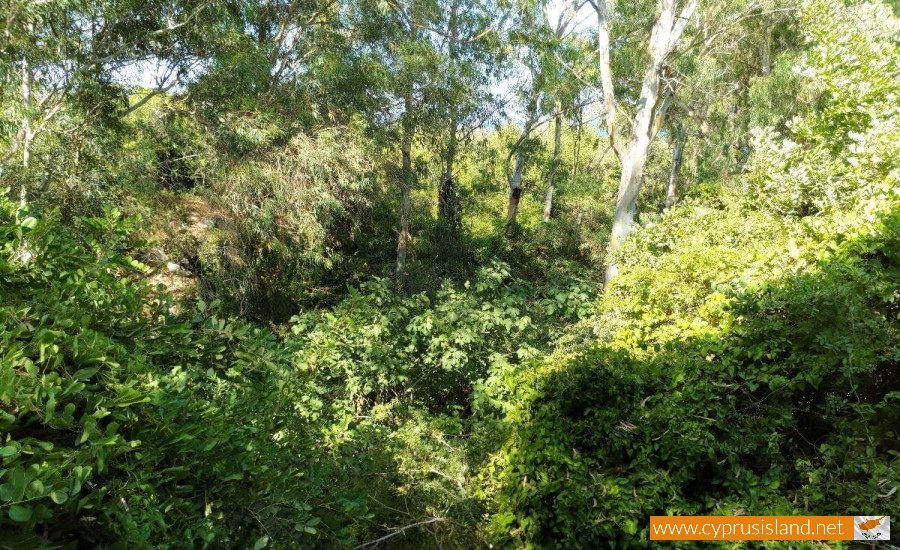 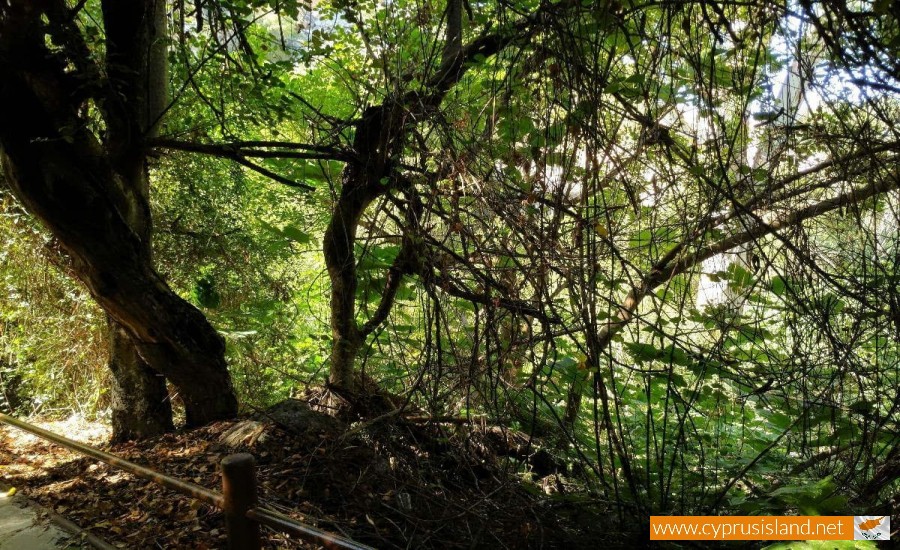 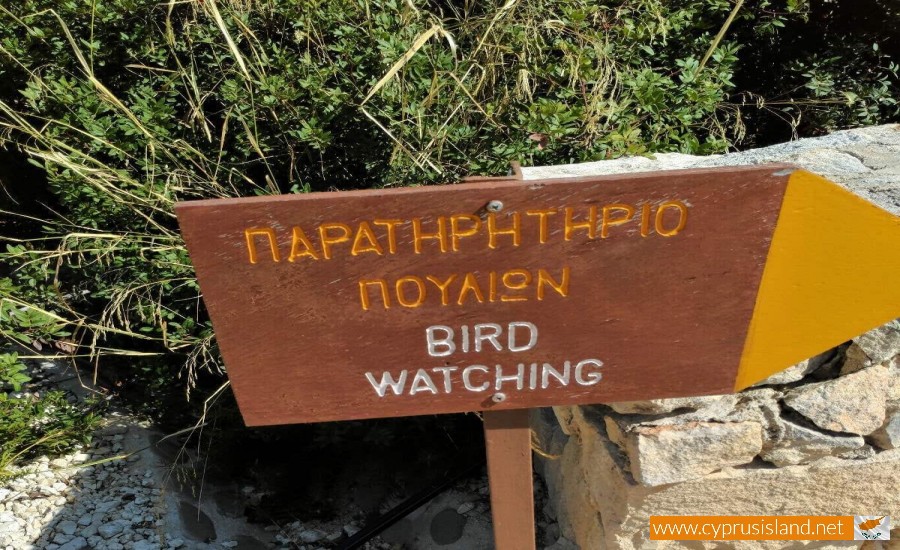 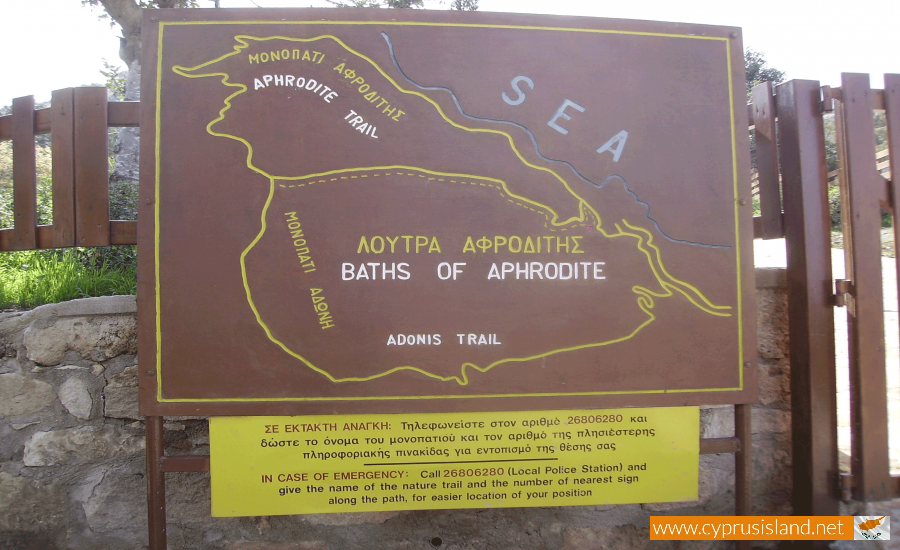 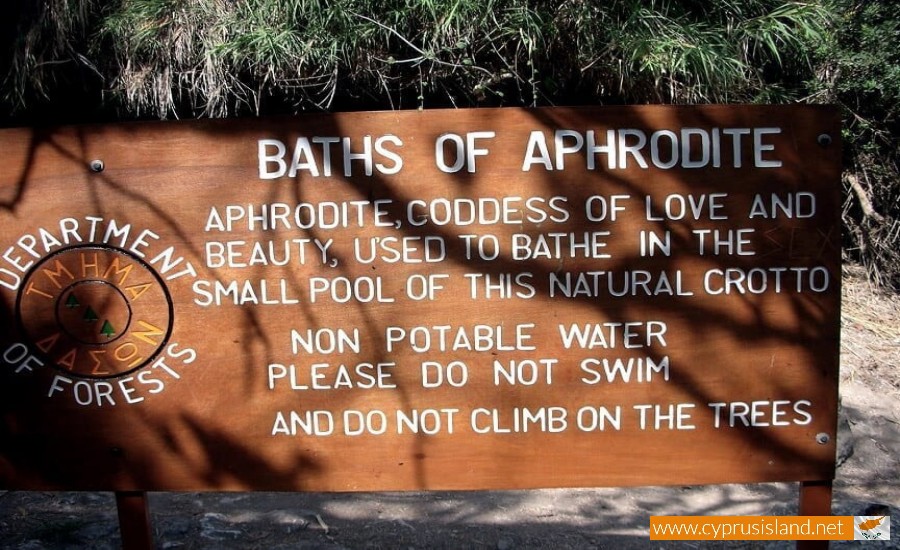 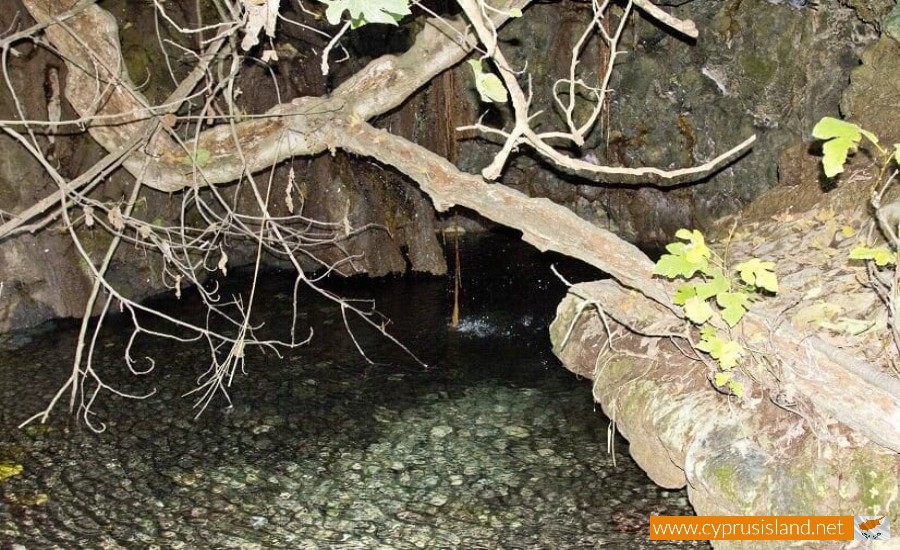