Palepaphos which means old Paphos was one of the most honoured praying centres of the Greek world, and was once a city-kingdom of Cyprus.

The city of Palepaphos extended around the area of today’s Kouklia , which is located near the banks of the Diarizos River , about 16 kilometres east of where Paphos is located today.

Palaipaphos and the surrounding area are linked to an ancient worshipping tradition which is connected to the Great Goddess of fertility, Aphrodite which seems to have already been worshipped in Cyprus from the Chalcolithic period (3900-2500 B.C).

According to tradition, the founder of the temple and the first priest was the mythical Cypriot King Kinyras, while a second legend links the foundation of the town with Agapinora, the King of Tegea in Arcadia Peloponnesus. The two versions include a core of historical truth which is proved by the archaeological findings. The findings did prove of existence of a settlement in the Later Bronze Age, before the Acheoi arrived on the island and who adopted the local Goddess of fertility.

From the beginning of the geometric period until the end of the classic period, Palaipaphos remained the largest urban and religious centre of west Cyprus. The last king of Palaipaphos Nikoklis , moved his quarters to Nea Paphos during the end of the 4th century B.C and therefore the town maintained its greatness due to the worship of Aphrodite.

During the Roman period the temple became the centre where religious issues were discussed, while it also had the control for the cutting of copper coins on the island. The religious and cultural activities ate the temple of Palaipaphos were interrupted during the 4th century A.D, with the spreading of Christianity on the island. During the medieval period Palaipaphos changed its name to Kouvouklia , found its old glamour and became the centre of regional administration and supervision of the production of sugar.

The area of Palaipaphos became the aim of treasure hunters from the 16th century. This activity continued until the end of the 19th century, while the continuous archaeological inverstigations began during the period 1950-55 by the British Archaeological Mission, under the management of J.H. Iliffe και T.B. Mitford. From 1966 the archaeological excavations in Palaipaphos were taken over by the German Archaeological Institute along with the University of Konstantzis (until 1972) and Zurich (from 1973 until today) under the supervision of Franz Georg Maier και της M.-L. von Wartburg. At the same time the Department of Antiquities excavated a large number of tombs in the surrounding area.

During September 1980, Palaipaphos as well as Nea Papho were included in the catalogue of the UNESCO Monuments Of World Heritage.

The most important monuments in Palaipaphos are:

The Temple of Aphrodite:

The Temple of Aphrodite is one of the most important and known religious centres in the ancient world. The remains of the temple include two groups of buildings. To the south is the most ancient temple, the temple I which is dated to the end of the Later Bronze Age. It is made up of one outdoor square which was surrounded by great walls and an arcade in the centre in which the symbol of the Great Goddess was kept. The worshipping symbol was maintained and kept in the roman Temple II which was constructed towards the north of the previous temple and is dated to the end of the 1st century of the beginning of the 2nd century A.D. The temple II includes an interior square and is surrounded by covered arcades towards the south, east and north sides.

It is located on a hill that dominates the surrounding plain. It was built by the Louzonian Kings during the 13th century A.D and formed the centre of the regional administration and supervision for the production of sugar. After the Ottoman occupation in 1571, it was transformed into a supervision centre of the Kouklia feuds. It was abandoned during the beginning of the 20th century.

It is a building complex with a central outdoor yard. The only parts that have been saved today are part of the tower gate and parts of the east and south wings which were incorporated to the ottoman building. The Gothic room towards the east wing forms one of the nicest gothic monuments that have been saved on the island. The east wing is used today as the Local Archaeological Museum of Palaipaphos and houses findings from the Temple of Aphrodite and the surrounding areas.

The Panagia Katholiki Church is located towards the west of the Temple of Aphrodite. It was built during the 12th of 13th century B.C and follows the architecture of the free cross with a dome. It must have been the community temple for the village of Kouklia for quite a long time. The west part of it was extended during the 16th century. Its interior is decorated with iconographies that represent the traditional byzantine folk art of the 15th century.

The House of Lyda

The House of Lyda is a roman house located in the location Alonia , northwest of the Temple of Aphrodite. The only thing that has remained from the house is the central room, which had an excellent specimen of a mosaic floor dated to the 2nd century A.D, displaying Lyda and the Swan. Today it is on display at the Kouklia Local Museum which is housed in the Medieval Mansion.

The Northeast Gate of the Fortification Wall

The Northeast Gate of the Fortification Wall is located in a commanding position above the Hill of Marcello. It was one of the towers of the ancient fortifications. The first phase of the walls and the gate was built during the early archaic period (second half of the 8th century B.C). Many reconstructions and alterations occurred but the wall finally became useless a little after 300 B.C. The gate itself is a complicated and remarkable construction. Historically the fortress point is connected with the dramatic siege of the town by the Persians after the Ionic revolution of 499 B.C, when the Cypriots also rebelled.

Another part of the Fortified Wall exists at a distance of 150 metres southwest of the Northeast Gate. The same construction type as the previous remains of the wall is seen here. It is a grand and public construction with narrow pathways, small rooms and large walls, built in the interior view of the wall. It is dated to the 6th or the 5th century B.C. The Palace building was inhabited during the classic period and was demolished during the 4th century B.C. According to the excavations, it must have been the centre of administration, the base of the King of Palaipaphos.

The regional area of Palaipaphos includes many important necropolis, dated from the Late Bronze Age until the early Christian period. Many specimens of mobile findings from the necropolis are on display at the Kouklia Local Museum.

The Luzonian mansion was the centre for the production of sugar in west Cyprus, and it was linked with the production facilities for processing sugarcane. The sugar mill in the coastal area of Kouklia in the location Stavros is still visible today. From there we can make out the four stages for the production of sugar cane: the grinding, the boiling, the sifting and lastly the storage. The use of sugarcane is fated from the end of the 13th until the end of the 16th century A.D.

took place. The ship was originally taken to the Kato Paphos port and was sold by the British in an auction. The Mayor of Paphos was ordered by the Archbishop Makarios to buy it and it was then used as a display item in one of the museums. It was then brought to Chloraka by Papakosta Leonida and Zina Kanther. 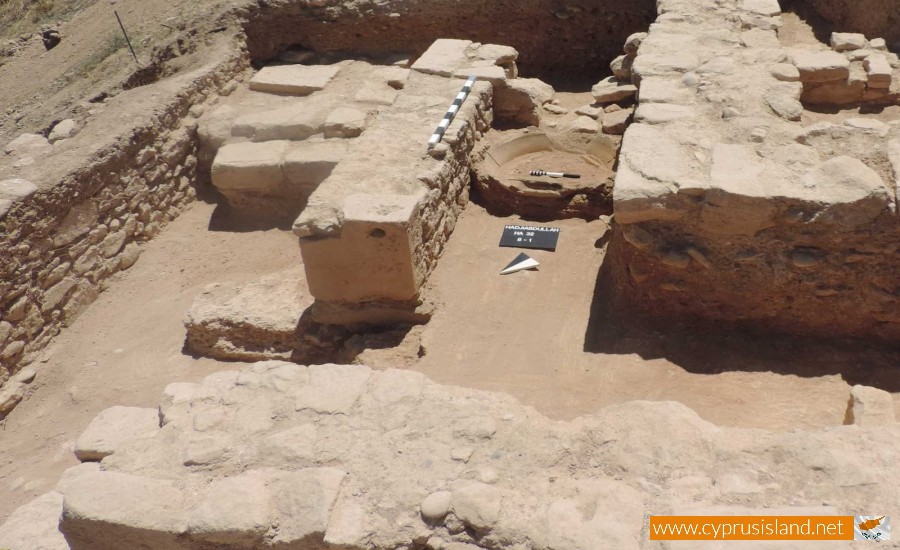 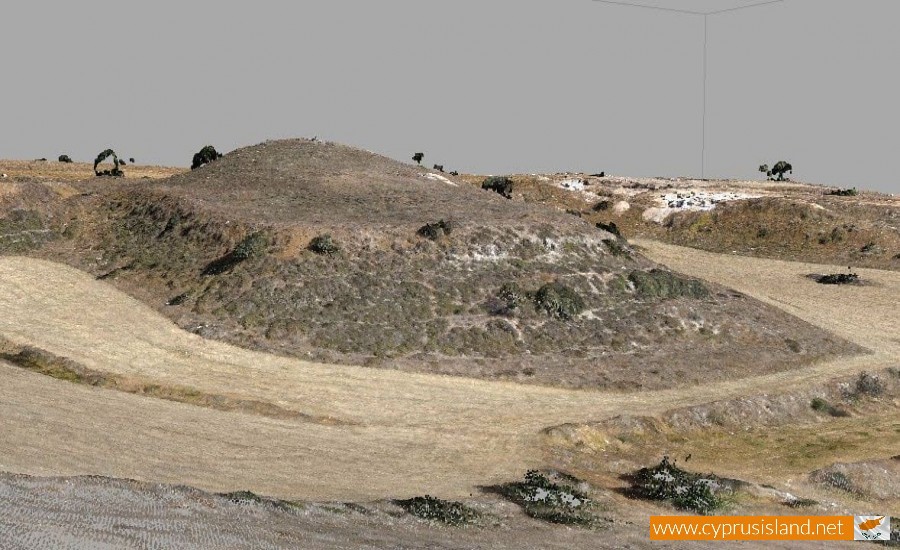 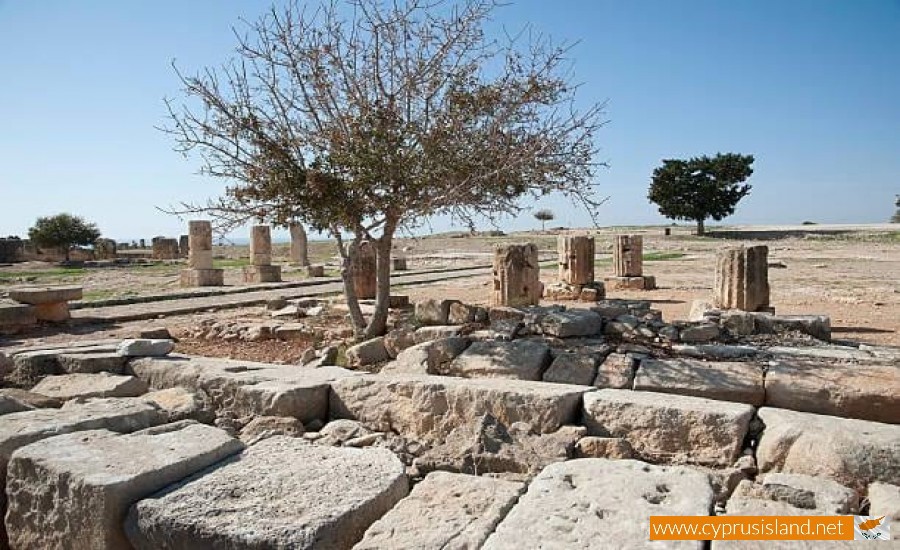 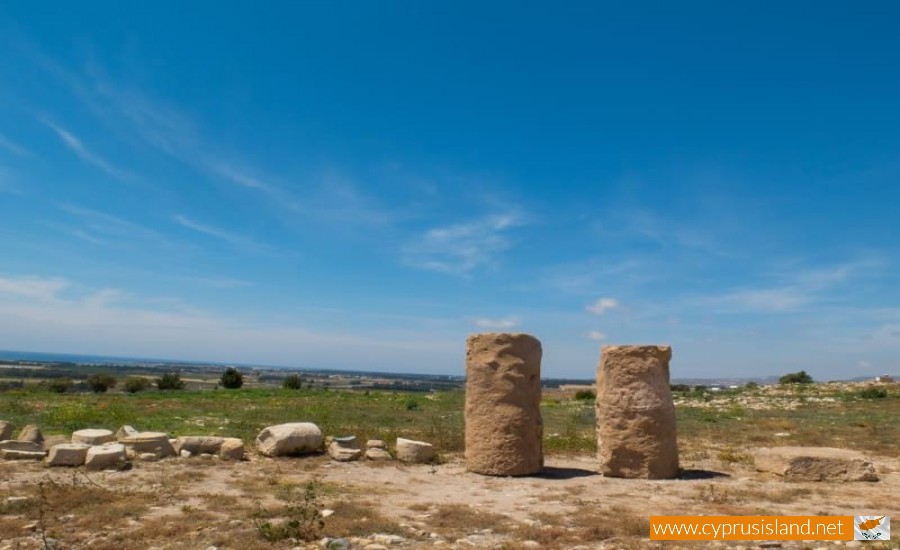