The history of Spilia and Kourdali began from the 16th century. That is when the church of Panagia Chrysokourdaliotissa which was in the centre of the monastery which extended around it.

During this era other monasteries in the area were also built, as well as other small communities in the mountains of Troodos. This is where they found safety from the Franks initially and then from the Turks. It should be mentioned that from Kourdali until Asinou, there were 14 communities. The monastery at Kourdali had many pieces of land which families inhabited and worked in the fields.  This way, the Kourdali village was formed. The monastery had collapsed and the only part which was left was the temple.

With the passing of time, the village grew and the residents gained their own pieces of land. The community grew because the smaller communities were destroyed and the residents of the surrounding areas moved to Kourdali.  Due to the fact that the Kourdali valley was very narrow, some people began to build houses a kilometre higher in the area of today’s village Spilia , which had smoother areas. Also from here they could easily go to the village of Karidiou where they gained properties.

Spilia took its name from the fact that roman tombs were found in the west side of the village. With the passing of time, Spilia developed into a larger community than Kourdali. It seems that around 1850, the village was in bloom. This was the era that the church of Agios Antonios began being built. The two villages came to their development around 1960. The Spilia had about 470 residents and Kourdali had about 85. The primary school of Spilia had 80 children and the Kourdali School had 30.

There were five supermarkets, two tailors, four shoemakers and four coffee shops. Most of the men worked in the mines of Amiantos , Chrome and Foukasa. Others worked as wood cutters at the three contractors who took over the cutting of the pine trees in the surrounding forests. The women worked in the fields and at the same time they dealt with some livestock with goats, pigs and chickens.

It is the most ancient monument of the community of Spilia-Kourdali. It was built during the 16th century by the priest Ioannis Kourdalis. It is dedicated to the Virgin Mary. It is a temple made of three rooms, with wooden posts which hold a wooden roof, covered with traditional flat roof tiles. It is the only temple of Solia which has wooden posts. Its only characteristic is that the ancient posts and their supports are decorated or caved with colours. Unfortunately in 1921 the posts were removed and stone arrows were built making the temple into a one room. The roof was held by the stone arrows. Due to the weight the walls began to lean towards the outside and the temple was nearly destroyed. In 1968, the department of antiquities intervened in order to restore the temple to its original form.

The iconographies of the altar and the west wall of the temple have been saves and are in a very good condition. They are all dated back to the 16th century. Next to the west entrance is the iconography which shows the creation of the temple. There is also the assumption of the Virgin Mary. Underneath it there is the priest of the temple Ioannis Kourdalis who is kneeling and offering the temple to the Virgin. Behind him is his wife.

To the north area there is a large composition of Agios Georgios. There are smaller pictures surrounding the saint which show his life. The artist follows the Italian-Byzantine art. A characteristic of the temple is the fact that there are many Cypriot saints. To the south side the icon of Apostle Varnava is displayed. To the west wall of the temple there is a larger composition of the Christ’s crucifixion with many faces.

The golden plated templo of the church is excellent and is decorated with three rows of icons dated to the 16th century and will an excellent composition of the crucifixion at its highest point. The templo has artistic carvings on it as well. The icons are considered to be the best expression of Italian-byzantine art. The harmonic colours, the ideal composition the sweet and kind expression compose magnificent pictures. The icon of Agios Sozomenos , of Byzantine art with mild western effects  is now stored at the Mitropolis of Morphou in Evrihou. The same painter who is a great artist also created the icons of Agiou Ioanni Theologou, as well as those of Ioakim and Anna in the iconostasis.

The old temple of Agios Antonis is made of stone and is made up of one room with stone arrows holding a wooden roof. Next to the west door there is a tall pine tree. Between the tree there is the church bell. It is the natural bell tower of the church.

The temple must have been built around 1850 as the four large icons reveal that is why it was named as an ancient monument. The icon of Agios Antonios mentiones that the year it was built was 1851 and the money was donated by the board president Neophytos. The other three icons of the Christ, the Virgin Mary and Prodromos mention the year 1858 and the donator was the pries Ioannis. All four icons are sample of the Kornanos School.

The templo of the temple was of simple pine wood of excellent art, which were made and brought from another temple. The person who restored the icons, Christos Karis, dates them back to the 16th century. Some day that the wood made for the doors came from one of the many temples which existed in the mountains and the valleys from Spilia until Asinou. All evidence shows that these temples are all of the 16th century. Another witness says that there was another temple of Agios Ioanni at the west entrance of Spilia. Some say that the temple did exist at the west entrance of the village. It is also possible that the doors belonged to this temple.

The temple of Agios Antonios did not have any iconography on the walls. There are some parts which show that there may have been iconographies from the previous temple and they had stayed on the stones which were used to build this temple. The whole construction of the temple was very simple with basic pine wood. This shows that the village was poor. The residents loved their protector and it is said that he had the specialty to cure a dermatological condition.  The saint was greatly respected in the area of Solia and Pitsialia , that is why the celebration on the 17th of January brought many people to the village.

In 1913 the temple had some improvements made as the north entrance shows. In the meantime the villages Spilia and Kourdali grew and the temple of Agios Antonios was not large enough to fit all the residents who used to go to church every Sunday. The village was poor and times were hard. But the love of the residents for the church was larger.

They may not agree on many things apart from their church. They all agreed that there won be anything stopping them from having a church. Their house may be poor but their church must have it all. This is the thought that Klearchos Kyriakides had which lead him to the proposition that the church of Agios Antonios be rebuilt. And while the world suffered from World war two the residents did not consider it compared to the calling for a new nice spacious house for their favourite saint.

The new temple was officially opened in 1970 and the old temple was in danger of collapsing. The church board asked the opinion of the department of antiquities which announced the temple as an ancient monument and in 2003 the restoration began. The first stage was completed with success and the following is yet to come.

It is a chapel which is located in the Karydi area of the Spilia village, next to the road which leads to the community. It was built in 1994 and the treasurer was Antonis Karis. This was the wish of all the residents of Spilia as the old church was located in the same area and they wanted to be able to relive it. The old church operated every Easter Monday until 1960.  A feast followed under the shadow of the tall walnut trees is the area. The villagers wanted to make their wish come true. It must be mentioned that Agios Georgios is the favourite saint of the Greeks. It is he who kills the Arabs, Franks, Turkish and English who want to take over the people. The church was the temple of a previous community which existed earlier on in the area. Now the area is being rebuilt with new holiday houses.

This monastery is located in Kourdali and was founded during the 16th century and has been declared an ancient monument. We are not sure when it was destroyed, however its temple was saved which is the largest and the most graphical temple of all ancient temples in Solia. The reconstruction of the monastery is being done by the member of the board from Solia as well as Pitsilia. Some of the buildings have already been converted to cellars for the monks. This monastery is the only living monastery in Solia and Pitsilia. Its development is expected due to the religion of the residents in the area. The monastery is located in an amazing natural environment. There is a river with a Venetian bridge, wall nut trees, olive trees and the pine trees create a magical location. Many go the monastery of the Virgin Mary to seek help for their problems or if they want to christen their children there. 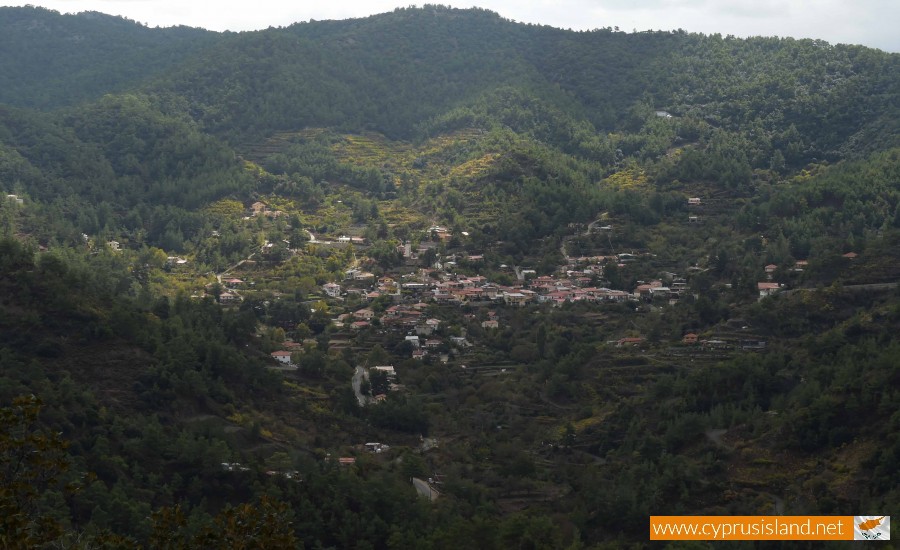 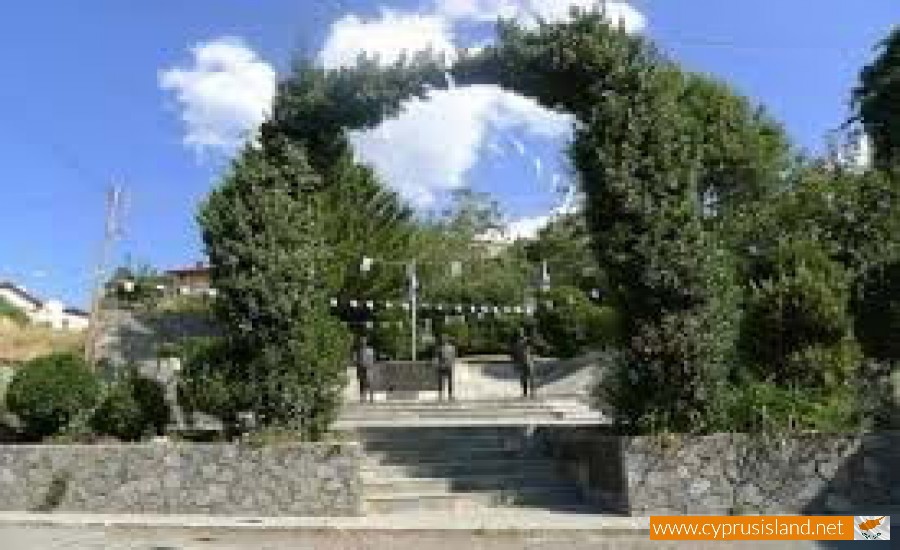 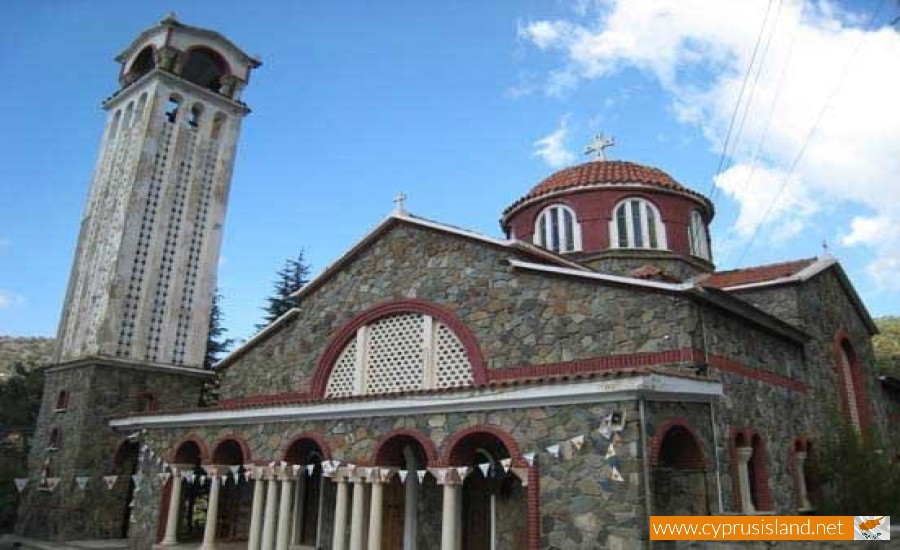