The Machairas Forest has an extent of 6.057 hectares or 60, 6 square kilometres. It is a national forest and it is made up of two large compact forest areas, that of Machairas and Aetomouttis (1553 ha) and a smaller one of Lythrodontas (131 ha).

The Machairas Forest covers part of the Nicosia and Larnaca districts and begins from an altitude of 300 metres reaching to 1423 kilometres (Kionia).

Even though the climate in the whole forest area of Machairas is Mediterranean, there are defences between the areas with high and low altitudes. Therefore in the Kionia – Machairas peak line the rain in the winter is more , and the annual rainfall reaches 700 mm. the temperatures during the summer are lower , without exceeding 32-33 degrees Celsius , while the winters are colder with temperatures reaching – 5 degrees Celsius along with snow. There is also some rainfall during the summer months.

The relative climatological data for the dry heat zone of Delikipos – Kyprovasa – Lythrodontas – Kapedes – Filani are : rainfall of about 300-450 mm , with the highest temperatures of 40 degrees Celsius , and rare frost during the winter. Rainfall during the summer months is extremely rare.

The variety found in the Machairas Forest is a result of the various ecological and other reasons which affect the development and the creation of amazing plant communities. These variables which affect are the climate, the ground which is determined by the local climate, the depth of the ground and human involvement (fires, livestock, woodcutting etc.)Therefore the largest part of the forest is natural and regenerates itself without human involvement, while in smaller extents the forest is man-made. This occurs in areas which have been affected by fires such as “Drys”, “Moutti tou Kormou” and “Tourkopoulieris”. Also the forest is thick in some areas, while in others it is scarce as well as blunt in some areas and with many changes in others.

Higher up at around 600-700 metres according to the area and the ground, one can see the endemic querous alnifolia and the arugala (Arbatus andrachna) , with its beautiful changes of colours. Latzia appears in either thick bushes or in a scarce pine forest especially in areas which are wetter and cooler.

The different types of plant species which are found in the Machairas Forest are estimated to exceed 600. Amongst them there are 27 endemic types including the Crocus hartmannianus and the Crocus cyprius which are protected species.

The fauna found in the Machairas Forest is rich with particular ecological importance. The main species are the fox (Vulpes Vulpes indutus), the Hare (Lepus europaeus) and the porcupine (Hemiechinus auritus dorotheae).

From the most common we mention the partridge (Alectoris chukar) , the Columba palumbus , the turtle dove (Streptopelia turtur) , the nightingale ( Luscina megarhynas) , the blackberry (Turdus merula) which even though it is a migrating bird it has been found reproducing in the Machairas Forest. There are also some different types of reptiles such as snakes and lizards. A variety of insects have also been found such as butterflies which compose a rich fauna of great ecological importance on the island.

In concern to outdoor recreation and forest tourism, the Machera Forest forms an important attraction for both foreign and local visitors. This is due to its cool summers, its natural beauty, the healthy forest environment and its short distance from the busy centres of Nicosia, Larnaca and Ammochostos.

The visitor of the Machera Forest has the chance to enjoy and admire the natural beauty of the forest ecosystems, to regenerate and relax in the magic of nature, to study, be inspired and exercise walking in the nature trails to have fun, get way from the stress and pressure of everyday life. The connection the visitor has with the forest elements will give unforgettable experiences which will nostalgically be remembered.

The visitors of the forest increase from year to year, therefore the forest department in cooperation with other services, have developed the necessary facilities and suitable amenities in order to offer a satisfying number to accommodate visitors such as picnic sites with children’s playgrounds and nature trails.

Apart from the picnic sites, the nature trails and the paths in the forest, a visitor can see and visit some other interesting places such as the famous Monastery of Panagia tou Machera , the Prophet Elias Monastery , and the Agios Onoufrios Chapel.

From the very beautiful areas in the forest, there are two which standout in particular and which are worth visiting. Travelling on the forest road from Machairas to Kionia one many stop for a while at the view point “Kakokefalos” and look towards the east. From there one can see the twin sister mountain peaks which are called “Dyo Mouttes”. This area is particularly different from the rest of the Machera Forest due to the fact that it is covered with the endemic type latzia (Querous alnifolia) which creates a very impressive thick bush. From the north one can enjoy the view of the largest part of the Machairas pine forest.

It is worth mentioning the historical area of the hideout of the “Cross eagle of Machairas” and hero of the 1955-1959 Freedom Fight , Gregoris Afxentiou which one can visit through the Panagia tou Machera Monastery road. 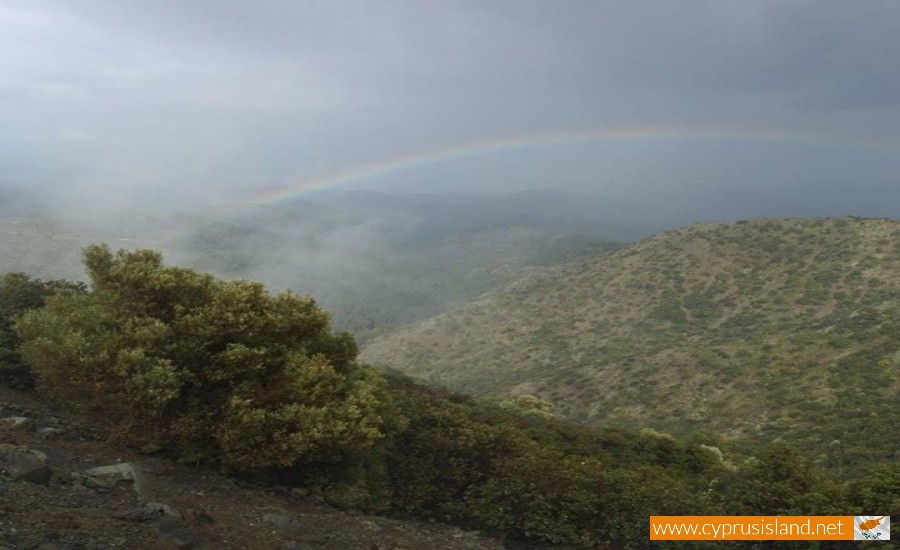 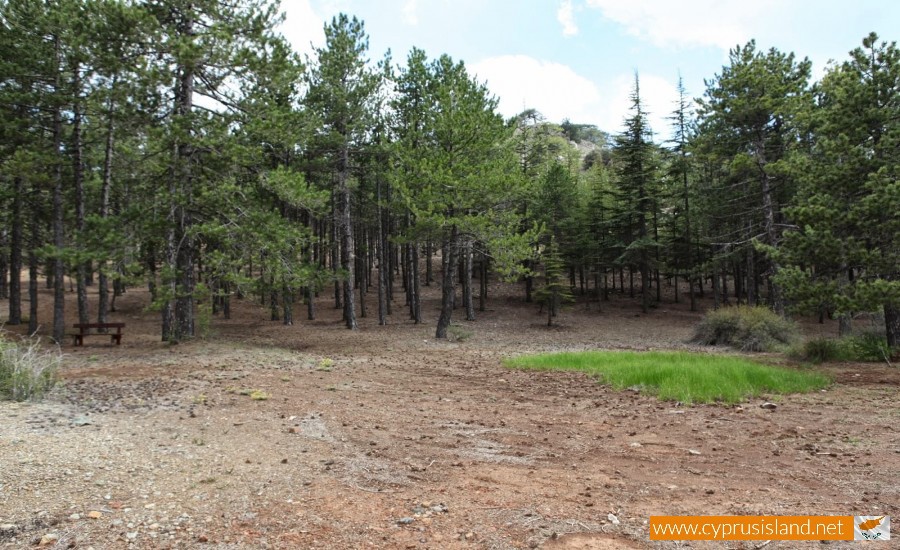 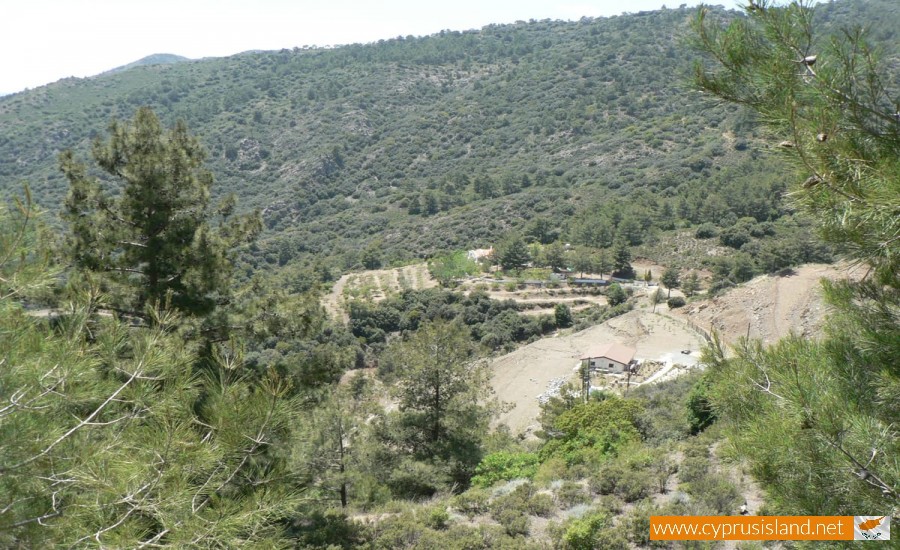 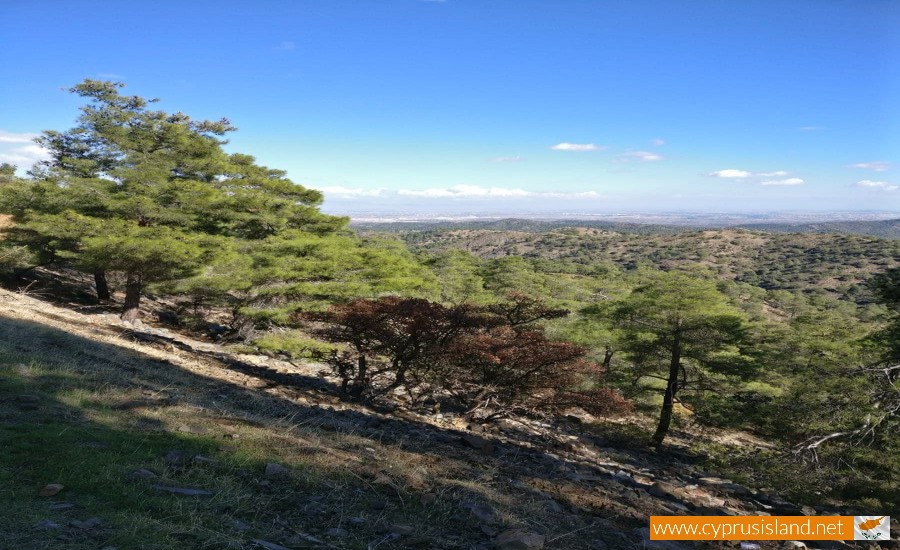