The church of Agioi Anargyroi Kosmas and Damianos , is located in the village of Agioi Vavatsinias in the Larnaca district.

The church was built on the base of another smaller church in 1871. The opening of the newest church which is saved today was done during the end of the 19th century in 1893. The carved templo of the temple is of the 19th century. What is especially impressive in this church is an Italian chair of the 16th century. The particular church however is nearly destroyed as it was not taken care of over the years, despite its value.

According to tradition, the village was visited by Agioi Anargyroi. There passing though the village was the marking for the church of the 19th century, a tree named ‘Sxinia ton Agion’ as well as their holly water.The church is built with local stone as many other traditional houses are built, which gives the area a uniqueness. The roof of the church which has been repaid is made of roof tiles. The church bell tower which is found today has existed from the beginning of the church’s existence.

However it has been repaired with the assistance of a donator in 1968.The interior of the church is especially impressive. The templo is carved, with icons which charm with their vivid colours. The special iconostasis has been carved by the technician Michael from Dali. At the same time the church is decorated by magnificent hagiographies.Near the entrance is a large iconography of Agio Georgio , while on the inside of the altar is an iconography of Ambaham’s sacrifice. Unfortunately it is not completely saved as there has been corrosion over the years.

According to the priest of the village, some of the saved icons which have been found recently, are possibly of the 16th century or even earlier. The particular icons had been buried for years next to the church and were discovered later by the priest. The discovery was made due to a witness who mentioned that the icons were buried there. The priests mentioned that while the new church was being built the older one was being demolished slowly.

Therefore the icons were buried in the courtyard of the newer church during the 18th century. The priests began the digging and discovered the icons which were taken by the department of antiquities for restoration.The church is an important monument of cultural heritage and its preservation is extremely significant. The church is already under the supervision of the department of antiquities.In general the tradition of the passing of Agion Anargyron , Kosma and Damianou is saved due to the church , the holly water and the residents.

It is remarkable how many people in the village have had a personal experience from the miracles of the Saints. It is deemed necessary in order to preserve our monuments in order to teach the new generation of the cultural heritage of our land. 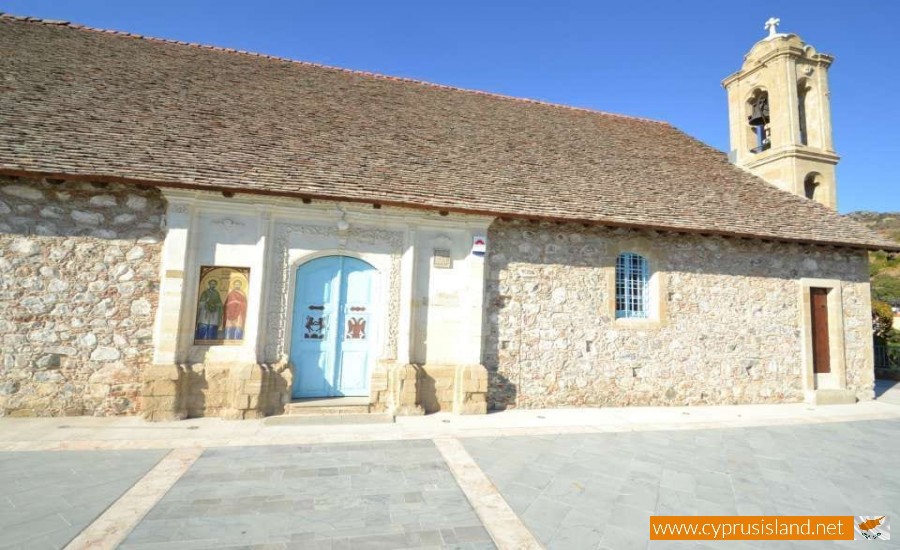