The Holly Temple of Agios Stefanos is located in the Paphos district. In particular there are two temples which are dedicated to the Saint Stefanos.

One of the two, is the most ancient one, built in the 13th century it is located in the village of Pachna. The second one, which is the newest is in the village of Lemba. Both temples celebrate the saint on the 27th of December, and on the 2nd of August.

Lemba village is located to the west of Emba village, and is an old settlement which was well known during the ruling of the Franks. The community was originally known as Praskion Siuron, according to Nearchos Klirides. This name was its original before the Franks changed it. Later on with the ruling of the Turks the name remained the same.

In this village is the temple which is dedicated to Saint Stephanos. Originally, there was another temple located in the position of the temple seen today. It was smaller and simpler, which made the church board extend it to accommodate more people. After 1974 Turkish invasion the church welcomed many refugees who came from the Ammochostos area.

The history of the temple begins from the middle of the 19th century (1850 και 1880). The feud owner of the area Savvas Nikolaides had a small storage unit at the borders of his land. Slowly the Christians began using this area to worship Agio Stephano. This occurred because a villager saw Saint Stephano in a vision while he was passing through the area and he told him that he wanted to turn the storage unit into a church.

This was told to all the residents who then began to visit the area in order to pray to the Saint for their problems of those difficult times. Then Savvas Nikolaides turned the storage unit into a church. When the Turkish-Cypriots who also lived in the village left, the Christians completed their temple and operated it.

After the barbaric Turkish invasion of 1974, the villages in north of Cyprus had to leave their houses and many of them settled down in the village of Lemba. The result was that the village grew larger and the Christians had increased. That is when the residents decided to create a new temple in order to accommodate all of the residents.

This difficult operation was taken on by the church board which was made up of the Priest Charalambos Papantoniou from Chloraka , Andreas Kambanealas , Loizos Loizou , Moses Seraphim from Ammochosts , Nektario Sidropoulo from Greece and Varnava Varnava from Kato Varosia. All these people worked hard in order to complete this project which was also supported by the Metropolitan of Paphos as well as other believers who willingly gave money for this charitable cause.

Even though there were many economic as well as other  difficulties involved , the church board as well as the priest Stavros Leonidas an their associates Mr. Nikos and Mrs Koulla Opsimou and Neophtos Charalambous managed to gather a large part of the money which was necessary in order to build the church.

That way today, the residents of the village of Lemba honour the Saint which has completed many miracles to both young and elderly since the small storage unit became a worshiping area. All of the miracles are written down in the book of Mr. Kyriakos Tapakoudes which is mentioned in the historical book of Agios Stephanos and have been transferred from generation to generation through our tradition.

A visit to Lemba and in particular to the temple of Agios Stephanos is definitely worth the visit especially on one of the two days which he is celebrated, either on the 27th of December or the 2nd of August. 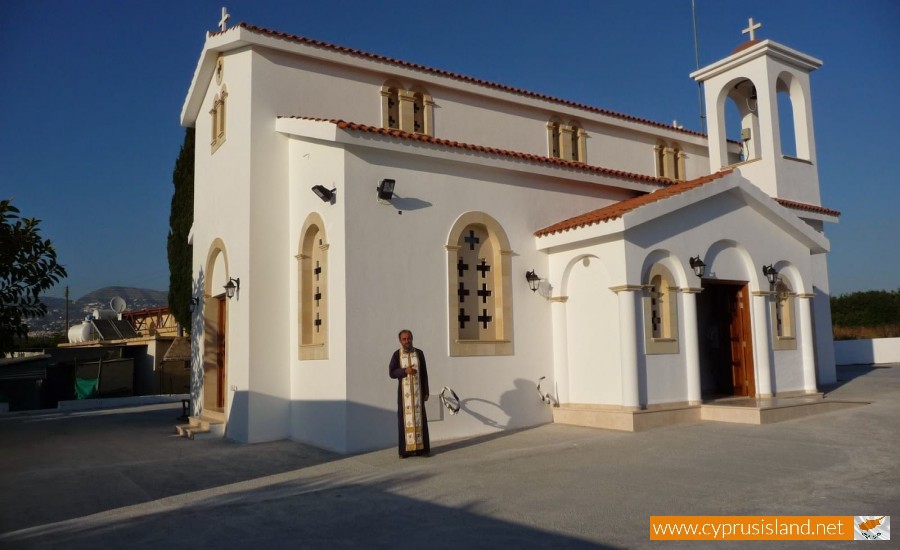