The Folklore Art Museum is situated in the village of Galata in the Nicosia district. It was originally set up during the summer of 1990 from the Headmaster of the School Mr. Athanasio Papadopoulo. After many visits to many villages he managed to create a nice museum with rich items, the first in Cyprus. In three months’ work the dream for a creation of prototype museum became reality. The founder of the museum wanted to collect tools, cooking items, pottery, clothes, furniture, and other items of everyday use which were used in other eras. He said that he saw them thrown, abandoned in gardens, in destroyed houses and they were being ruined. He wanted to collect them and protect them from time and rust.

All the museum items which are over 500 items are arranged according to occupation. The tools used by a Shepard, a farmer, a builder, a butcher, a roof tile maker, a carpenter. There is a rich collection of clothing, kitchen items and a variety of furniture which you are happy to see. The opening of the museum took place on 11/11/1990 by the Minister of Education Mr.Christoforos Christoforou. A donator of the museum who gave two thousand pounds was Michalakis Kythreotis. The museum operates during morning and evening.

The entrance of the museum is a traditional double wooden door of pine wood, while the roof is made of bamboo placed on wooden posts. The walls are white and the whole atmosphere reminds old village houses which are warm in the winter and cool in the summer. Even though there isn’t much space, Mr Papadopoulos has managed to order the various items, which are contributions from various villagers.

In the same place there are items of the farmer, the shepherd, the shoe maker, the seamstress, the roof tile maker and many others. In other words the exhibits cover half the village house from the beginning of century and later on. After entering the museum there is a poirot which is dated to 1925 to the left there is a teacher’s desk dated to 1915. On top of these there are icons and kitchen items some of which are dated to the previous century and remind other eras.

To the right there are traditional Cypriot uniforms, an old swing machine as well as an old children’s bed made of iron and covered with white touli.  To the left there are different type of items which were considered to be necessary in the old traditional Cypriot house such as pots, bread boards, bottles, argyle and others. It is sure that in such a place there would also be tools of a shoemaker, as well as the plow, the libra for the horses, the spindle, the spinning wheel and others. All these are in a very small area. For all the exhibitions on display thee is a book that states by who they were donated by and the date which the donation took place.

During December 2013, the Folklore Art Museum was transferred to the primary school of the Community. The primary school was built in 1919 and is made up of three large rooms. It was also renovated in order to accommodate the museum. 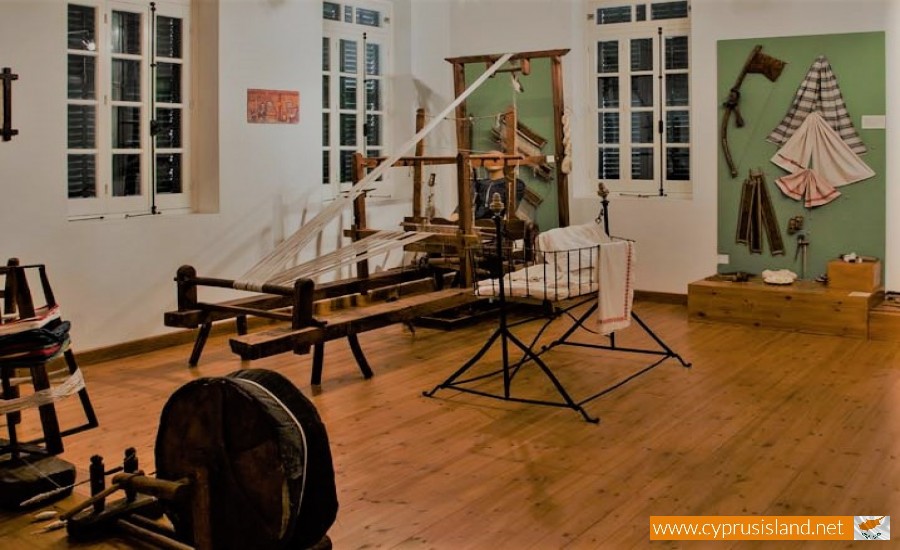 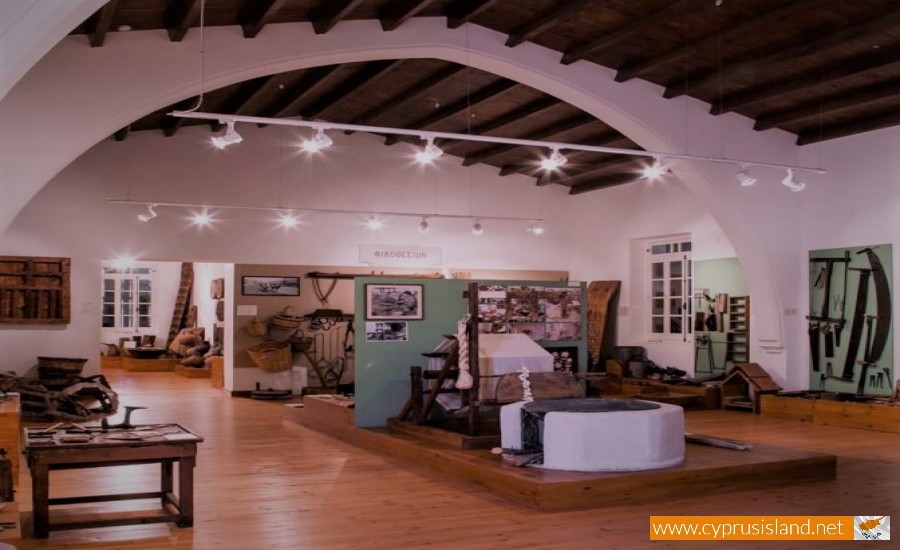