The Kantara Castle is one of the three most important castles build on the Pentadaktylos Mountain range in the Ammochostos district, located in the occupied part of Cyprus at Trikomo village.

The castle is built at an altitude of 2068 feet and stands out on the north beach and the valley of eastern Mesaoria, which controls the entrance of the Karpasia Peninsula. Like the Castles of Agiou Ilarionos and Voufavento , the Kantara Castle was built during the Byzantine era , after Cyprus’ freedom in 965 A.D by the Arab raids. However there is no information about the castle before the occupation of the island by the English King Richard the Lionheart in 1191 A.D.

The first reference about the castle was in 1191. The self-announced king of Cyprus Isaak Komninos, sought refuge at the Kantara Castle after his defeat by Richard Lionheart. He then fled the castle and surrendered to the English King as soon as the Kerynia Castle passed into the hands of Gi De Louzinian.

More information about the castle, is from the Frank and the Venetian period (1191-1571). The natural fortification of the castle made it the centre of conflicts, especially during the Longovardic War. The castle known with the name Candaire or Candare, remained impregnable by its besiegers.

According to historical sources, the fortress was fortified and powerful however in 1562 it was abandoned. Stephan Louzinian stated that the thee fortresses of the north mountain range (Kantara , Voufavento and Agios Ilarionas) , were demolished by the Venetians who did not consider them to be important buildings and due to the lack of army they could not keep them manned. Of course the demolition was not complete, even though the weather conditions contributed to their further destruction.

The building it built on a rocky peak which gave the fortress its exterior shape. From the north, west and south sides the steep rocks did not allow access to the fortress. Therefore the entrance is located to the east side where the rock is a little smoother and access is made easier. The entrance is made up of an imposing stronghold which is protected by powerful towers. Today the stronghold and the exterior entrance are destroyed.  The exterior wall ended towards the north and south in two horse shaped towers with battlements.

The southeast tower in the interior of the fortress is a large rectangular room covered with groined-Vault. The vaulted basement of this room (which was transformed into a stern for the preservation of rain water), originally operated as a prison. Southwest of this tower there is another room covered with a pointed arch and to the south of this room there is a series of three vaulted rooms with battlements.

The quarters of the top of the castle (2068 feet) has is south wall nearly intact and has an impressive window. The view from this area is especially majestic as one can see the north beach of the island, the Karpasia Peninsula and the eastern Mesaoria as well as the Ammochostos bay.

The northeast tower dominates the entrance and any movements in the sea towards the north. The tower is made up of an alley of battlements which leads to a square room with a horse shoe vaulted tower along with battlements on its three sides. The second floor of the northeast tower is made up of a long and narrow pathway which ends at a rectangular room. 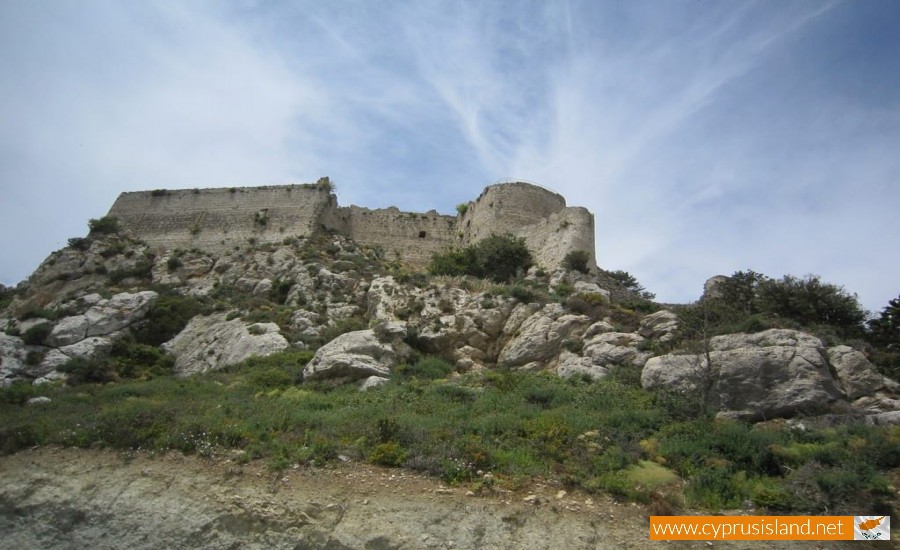 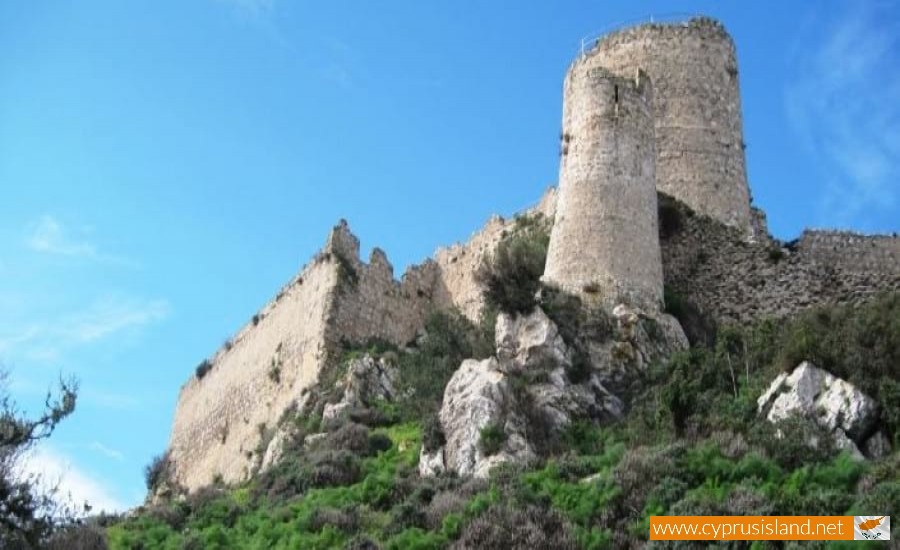