Potamitissa is a village in the Limassol District of Cyprus, located 5 km south of Kyperounta. According to the inventory in 2011 Potamitissa had 62 residents. The basic occupation of the residents is land agriculture. In Potamitissa, they mainly grow peaches, apples , pears, prunes , cherries, apricots, walnuts, olives , almonds as well as many types of vegetables. There are also many vine areas which are then used to make various wines.

According to research, the village is built in an area which the Byzantine monastery dedicated to the Virgin Mary Potamitissa was formerly built. The residents who lived in the village Rogia fled from it and sought out refuge at the monastery. Rogia was a large village with four churches which was destroyed completely due to the Kraman (Turks from Asia Minor) raids. It is not exactly known when this occurred but it is believed to have occurred sometime before the Venetians took over in 1489-1570. This is proven by the existence of a wooden venetian bridge which was located in the village, however the bridge was destroyed in order to create a new stronger one in order to withhold the weight of cars. Tradition says that the Venetians built this bridge because the village had good quality sausages, lountza and chiromeri which were even famous in Venice. The existence of the monastery in the areas can be confirmed by the reports given by travellers of the medieval times and as it seems the construction of a village around it was abandoned. Also tradition says that the area which the village church is located in, and is dedicated to the Virgin Mary was actually done so after the request of the Virgin Mary herself.

The main church village is the church of the Virgin Mary of Eleousa. According to tradition, about two hundred years ago, a shepherd from a nearby village called Pelendri was with his animals in the mountains. When he got half way between the two villages and in the area “Deisi” he lost a goat and stayed there until dark. While helplessly searching for the goat he noticed a bush which had a light like a lightning bolt which connected the clouds with the earth. He left there terrifies and did not sleep all night from the disturbing sight. He did not tell anyone about it until dawn when he got up to look at what had happened. When he got to the area he began to cut the branches with his axe in order to see what was under. To his surprise he saw an icon of the Virgin Mary in the middle of the large rocks which were covering her, not only from the sun but also from the rocks, like a protection of the ancient icon. The shepherd did not touch the icon but ran to the village. He took his goats back and ran to the priests to tell them the good news. The fact was quickly announced in the village and the priests ran to the area with joy and enthusiasm ready to transfer the Holly Icon to the village Pelendri. When they came near the area where the icon was though, the sky quickly became cloudy and it was about to rain. The simple people of the village thought this to be nothing and did not consider it as being anything. When they got the place where the treasure was they prayed and vowed towards the Holly Icon. However when they picked it up to leave, lighting thunder and rain began.  On the other side though where the other village was there were no clouds of thunder. The people thought it was a sign that the Virgin Mary did not want the icon to be transferred to Pelendri. They put the icon back in its place with fear and left. As soon as they did that the storm stopped. For three days the people begged the Virgin Mary to allow them to take the icon to their village. They decided to try again, thinking that God may listen to their prayers. Therefore they began their trip to the area where the icon was but before they came near the place, bad weather came and they abandoned their goal. The news spread to Potamitissa and the minister there along with a few residents went to the area where the icon was. They found the icon , they prayed and then they transferred the Holly icon to the church where it can be found today. The Potamites decided to build a church in honour of the Virgin Mary who chose their village as they did not have a proper one there. They chose an area opposite the village, southeast at and they began building. They came across many difficulties and when they got to a point the construction broke without knowing what happened. They built the broken wall again and the next day they found it broken again. Apart from the wall breakings they also came across other difficulties which made them think that the area they were building the church in was not approved by the Virgin Mary. After thinking and being puzzled, the manager of the construction announced in front of everyone: “Virgin Mary, if you do not want your church to be built here, then present to me the area you want. I will throw my hammer in all the locations and you can show me the location you want and we will build it”. He did his cross and threw the hammer in various directions and it fell according to the weight and power which he threw it with. He threw it towards the direction of the village as if it had wings and it flew 200 metres, crossed a river and fell into a bush. Everyone believed that the Virgin Mary wanted the church to be built there. They cut the bush, took the hammer and built the church there where everything went right. It was a long church where today’s church is located. In 1925 they extended the new church around the old one and that way they did not change the position that the Virgin Mary wanted. The church was dedicated to the Virgin Mary’s birth. On the icon the name Virign Mary Eleousa is written but all the residents and the nearby villages know it as Panagia or Potamitissa. This is now only due to the name of the village, but also due to the fact that the village is surrounded by a river on three sides, the north, south and east. The word river in Greek is potami hence the name. Also it is located 25 metres above the river. On most Sundays visitors from nearby villages go to the church with candles which they light at the Holly Icon, others to thank for its gifts and others to pray for their sick loved ones.

During the earlier years and until the middle of the 20th century , when women still bore their children at home with the help of a midwife , the pregnant women would go to the Panagia Potamitissa to pray in order to help and protect their birth , by lighting a candle and giving a handkerchief which women wore then. Women would go from the ten neighbouring villages with their babies in order to thank the Virgin Mary by lighting candles and hanging the handkerchief on the icon. Since the finding of the icon every Easter Tuesday people would go to the area andpray. Therefore every Easter Tuesday is the annual festival of Potamitissa.

The chapel of Chrysomirousa was built in 1971-1972. It is dedicated to the Kimisi tis Theotokou (Sleep of the Virgin Mary) and operates every year on the 15th of August. The chapel is located one kilometre from the village and about 60 metres above the road, hidden in the olive and pine trees. Near the chapel a campsite of the Sunday school of Palouriotissa has been established. It was renovated on the 17th of August 1980 and was dedicated to the Kimisi tis Theotokou. In the chapel there is an icon of the Virgin Mary the Chrysomirousa. The icon was taken by the old villagers of a small abandoned village. This village was where the chapel now stands. The village had two churches, that of Timios Stavros and Saint George. The chapel of Chrysomirousa was built in the ruins of the church of Saint George. From these two churches, the only icon which was saved was the one of Theomitoros tis Chrysomirousis and that is why the chapel took this name.  The only interpretation which is given for the name of the icon Chrysomirousa is that of chriso and miro which means gold essence. It is said that the icon used to give out an odour of essence. In order to never forget this godly event the Christians wrote the word Chrysomirousa on the icon. 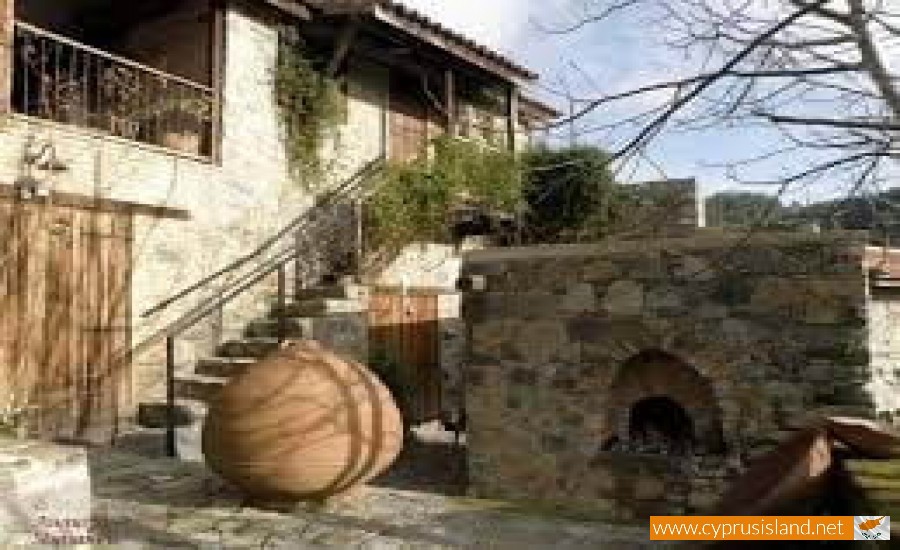 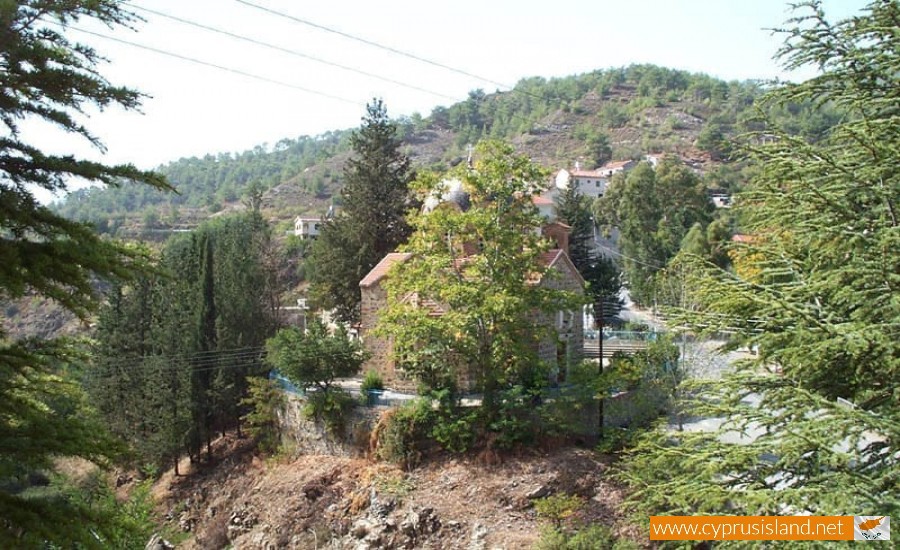 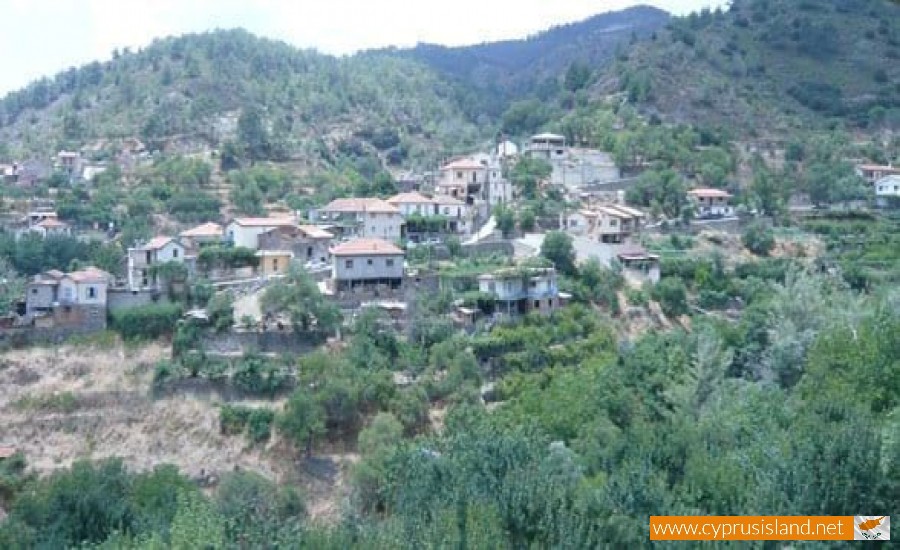