Laneia or Lania is a small traditional village of the wine villages in the Limassol district. It is built at the 25th kilometre of the Limassol-Platres road, at an altitude of 575 metres. Lania is well known in all of Cyprus as well as abroad for various reasons. Firstly for the Virgin Mary of Valana , for its oak which doesn’t exists any more , for its traditional alleys , for its cleanliness , its hospitality , its traditional products which are produced or created , for its tourist development as well as the name Lanitis which is known in Cyprus.

The name Lania according to one version comes from the name Lana which is the name of the daughter of the Greek God Dionysus, the God of wine. Another tradition stated that the name comes from the valania of the oak tree which prospers in the village. A third version says that the village got its name from the bird aetomahos which is also called Lanios. The female of this type of bird is called a Lania.

The second version is adopted by Simon Menardo. Simon Minardos came to Cyprus and studied the villages and towns as well as the names of Cyprus and produced a relevant book in 1907. The centre of scientific research in Cyprus printed his book named Place and Cultural Studies. In his book he mentioned that the name Lania was due to the many valania which the area had. It is also mentioned that Lania was a countess and owned an area which was names Dionysus. The book does not mention anything else related to the daughter of the God Dionysus.

Mr. Adonis Konstantinides mentions a fact which has to do with the version mentioned without however confirming it. He mentions that his father was a teacher at Lania spoke to him about the area called Dionysus. He told him that it was an area between Lania, Trimiklini and Sylikou which was a worshiping area for the God Dionysus during antiquity.

Years ago when the villagers cleared the fields of the Agios Georgios chapel, there were various ancient artefacts found along with a stone which had an inscription. The inscription brought the conclusion that the civilisation must have been of the Cypro-geometric era that is between 1050 and 750 B.C. This was the period of the first Greek presence in Cyprus. As it is known the Acheoi had inhabited Cyprus during the era following the Copper Era after 1400 B.C. the village must have been inhabited from the beginning of the era around 1600 B.C. During this period copper mining in the Troodos area was at its peak, as it was nearly located at the surface.  Until recently it was believed that copper was transported to the ancient port of Amathounda where exportations were done abroad. The recent excavations in Alassa, brought a large amount of copper to light. After that the scientists concluded that the copper from Troodos were transported to Alassa where they were processed. It is possible that these communities were built on the way in order to assist in the transportation from Troodos towards Alassa.

In the area of Lania there weren’t any excavations. However in the area of the Agios Georgios chapel as well as the area Hassiena, Agia Marina, Katallymata ancient items were found. It is therefore very possible that the age of Lania is dated to the 15th century.

Findings of the same Cypro-geometric period were also found in tombs in other areas of the village. In the area Ellinikos or Ellinika, Greek tombs of the late copper era were found at the entrance of the village. This is mentioned by the villagers and is confirmed by the book of Simon Menardos.

Cyprogeometric findings were also found in the area east of the Valana hill. This proves that during the Cyprogeometric period, the area of Lania was inhabited by an important number of people in various communities. The different areas possibly mean different routes of copper or communities which didn’t have anything to do with it.

These communities seem to have been preserved until the end of the Cyprogeometric era, possible even after the first Christian years. The presence of so many communities in such a small geographic area does not necessarily prove that all communities existed during the same period of time. Because it is a large period of at least 10 centuries the same people were possibly forced to rebuild new communities in nearby areas due to the catastrophes of earthquakes, raids, changes of the copper routes.

During the first Christian years, residents of the village must have accepted the Christian religion. An indication of this is the cave in the area Agia. In this area, as Simon Menardos mentioned between Lania, Agiou Mama and Limnatiou there is a large cave, the cave of Agia. This cave is believed to reach all the way to Limassol and was used as a refuge for shepherds in the winter. A few years ago Mr. Nikos Sikas, a philologist and teacher from Lania cleared the entrance and went inside to explore it. In the cave he found the symbol ΙΧΘΥΣ which was the symbol of the first Christians.

Mr. Sikas studied the finding and the cave coming to the conclusion that it was a catacomb during the first Christians. He mentioned that at the village coffee shop however when he returned to the have a few days later he was disappointed to see that someone had removed the golden part of the cave with the symbol.

During the 4th century A.D, Agios Epifanios who was born in 310 A.D in the village Visandouki of Palestine, visited Cyprus in order to see Agio Ilariona. However he stayed here and became an episcope. In one of his tours he passed from the area as well as Lania. An area of the village is called Epifanouthkia and according to a witness, there is a church there in his name. The church was destroyed and in its place there is a house.

In another area in the village, it is said that the saint passed the house of Pogiaji, and the residents placed handkerchiefs or pieces of cloth on a brush, asking something from the saint as it is usually done. Agios Epifanios also possibly visited the area Valana. In nearly all the villages in the area there is a church or a chapel dedicated to Agio Epifanio.

In the area of Lania many monasteries-feuds prospered, some of which were Valanas , Agia Marina , Katallymata , Amasgou and Archangelos in today’s Monagri as well as some in Agio Mama. All these monasteries have ruins or samples which have been saved until today. In the area of Lania there were at least three. One of them was Valanas, in the area which the chapel is built. In the area there were ruins and other instruments found. There was also a miracle icon of the Virgin Mary of Valana, various icons, two metal trays and the Holly clothes of the priest.

The second one was Agia Marina in the area south of the village. In the village, in particular at the borders of the vineyard of Ippokrati Christofi and his sister Kallisteni, and Mr. Taki Karagianni is the church of the monastery-feud. The third is located in the area Katalymmata in which there are traces of the community in the area and the ruins of houses.

During the Ruling of the Franks and the years which followed, a community still existed in Lania. On the map Abraham Ortelious of 1573, A.Pavlides mentions in the Great Cypriot Encyclopaedia, that the position of the Lania village today is in the position of another village with the name Cagna. Another community with the same name is presented in older Frank maps.

After the Ruling of the Franks, came the Venetian in 1489 and kept Cyprus until 1571 when the island was taken over by the Turks. In the following years which passed, the monasteries and feuds were destroyed and even completely demolished. Very few monasteries were saved by the catastrophe and all these monasteries were located at difficult to get to mountain peaks.

Lania was amongst the monasteries which got destroyed. The difficult living conditions of the time decreased the population of the island which did not exceed 90.000 people. Lania did not manage to get away from the Turkish invaders. The size of the destruction is not known however some of the communities in the village fought against them. This is known from the following:  The Turks had brought canons with them for extreme circumstances. These canons had contained black rock in them and remains of black rock were found the area of Valana and Epifanouthkia which shows that the canons were used in Lania.

The other fact which show the magnitude of the destruction is the abonnement of Lania from its residents. The residents left Lania and moved to the southeast which is the area of Paliolania located northeast of the Kourri Dam near the area Vounaros. That is where they stayed for 40-60 years. The area of Paliolania is also mentioned in Simon Menardo’s book.

The conditions improved later on and some of the descendants returned to the area of Valana which they found completely destroyed. This movement must have occurred after the Turkish occupation. The fist people who returned were land owners in the area of Valana, with the first family being the Papafrangous. If someone studies the fields which are around the area of Valana and towards the south of the village most of them were owned by the family of Papafrangous.

They replanted their land and vineyards. They did not however live in the area of Valana apart from coming more towards the south of the village which it is located in today. They built the church and the houses around it during the mid-17th century. The temple in the church is dated during 1676. All the houses which are around the village of Lania were owned by the family of the Papafrangous.

In 1780 according to a piece of information, the Papafrangoi found 13 icons in the area of Valana and they transferred them to the new church in the village. It is said that these icons are completely destroyed and possibly the only one which is in good condition is the miracle icon of the Virgin Mary of Valana. The finding of the icon of the Virgin Mary of Valana is accompanied by many stories and myths.

Along with the Papafrangous another two families arrived in the area. One was the family of the Potson which moved to the area of Agia Marina. After looking closely at the land in the area someone can easily notice that until a few years ago everything was owned by the descendants of the Potson family. This family still exists today.

The other family came from Kerami, an area near Kato Amianto. The man of the family was called the Keramos and he moved to the area Katallymata with his family around 1820. This can be proven by the land they own even today.  Even though the previous family used the name Keramos there isn’t anybody today who uses this last name.

In the book of Pelendri, Ioannides and Kolonas mention the village Keramis. In the book the settlement of Keramou in Lania is once again mentioned as the village Keramis was destroyed. It is also mentioned that some of the icons of the Keramis church were taken to Lania and are located in the church village even today , however which ones exactly is not known. 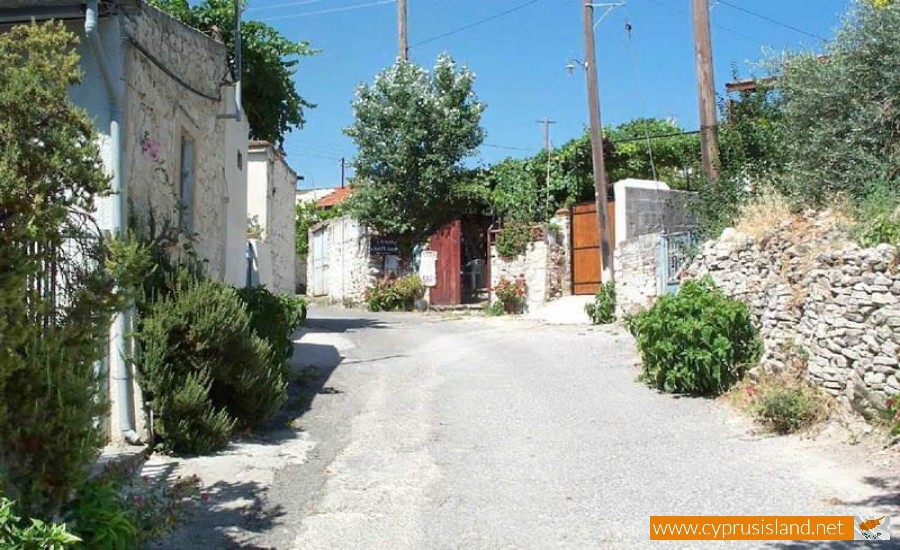 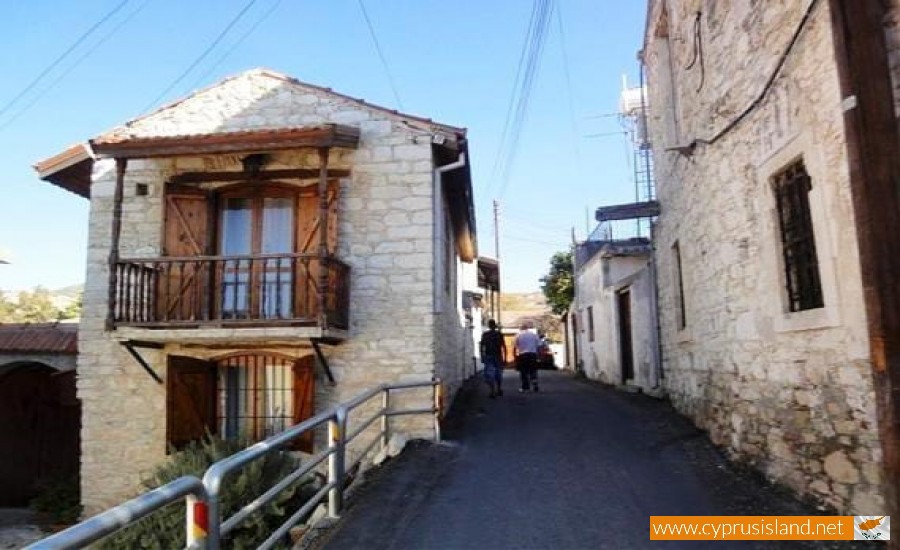 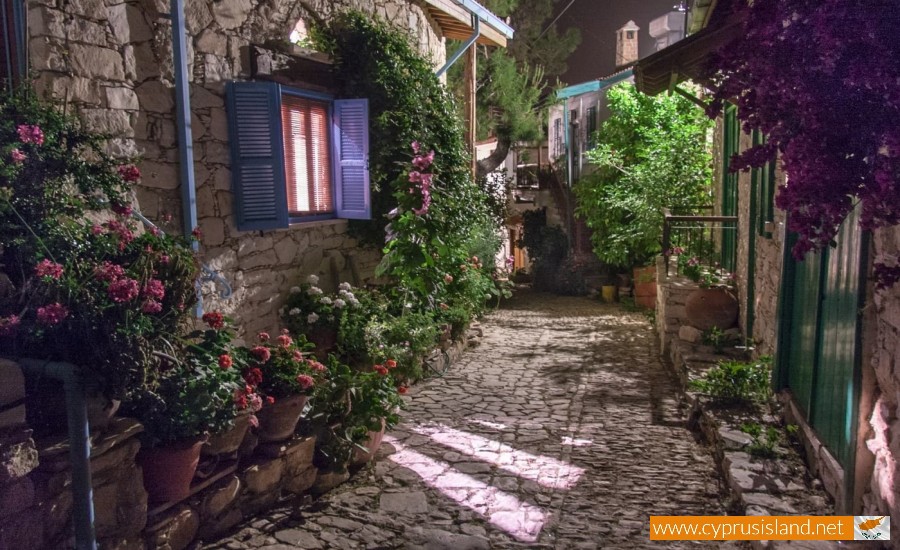